The exhibition called ‘Movement’ took place from 29th April to 13th May at Sendai Mediatheque with the concept “Movement of your mind and body, environment surrounds you / changes in things, a device that connects them, the tendency of today, and an experiment to pursue the relationship between them.” This exhibition connected the projects, ‘Gasbook 1’ and the June 2001 issue of Studio Voice Magazine ‘Poetic Horizons’. The venue, Sendai Mediatheque, is a culture complex. About 10,000 people of all ages visited it during the exhibition .

Thanks to new technology, young creators have more possibilities and there are many of them beyond categories: art, graphic design, visual media, fashion and product design. ‘Movement’ experimented the relationship between the works and people showing graphic design and graphic art from Tokyo, London, Paris, and the Netherlands. The event was organized to express the new wave of design and art, particularly space and air. 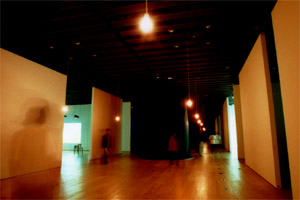 Sixth Floor: This dark main gallery was produced by shutting down the light from outside. There were so many sensors in the space. The lights were turned on gently when people came to the aisle and off slowly when they went away.

Sixth floor was the main floor. The dark space had no light through the window, and there were some bare light balls in the corridor that were turned on when the sensor caught people’s movement. In each room, there was an installation under various concept with sensors. Twenty-five projectors on the floor showed visual works, plane works, and interactive works reacting to each visitor’s movement. As a result, this exhibition gave the opportunity for people to touch and feel the works with their body as well as see the works. Hopefully I can describe my feelings and what I wanted to do in this exhibition as one of the staff. 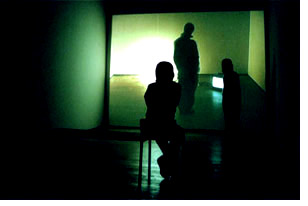 Room 1: There was a projected TV without any picture on the wall. The TV had a real channel selector where it should be. When it was turned, the TV showed different work. A bench was in the space. A Projector showed the Room 6 on the wall as if Room 6 was beyond the wall of Room 1. When the channel was changed, the picture on the TV that was really set in Room 6 changed. Actually, there were so many people running between Room 1 and Room 6. This was the fusion of virtual and analog texture, and an experiment focusing on ‘pleasure’.