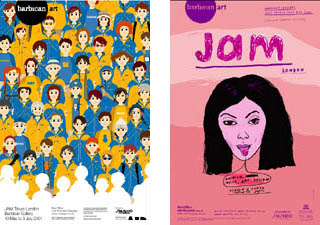 Japan 2001 is a one year-long festival celebrating the interaction between Japanese and British culture. The festival, which reaches its peak in May and June, showcases many different events, from youth culture, art, design and fashion to other fields such as food, religion and tradition. The listing of the festival has been impressive and it was especially the JAM: Tokyo/London that caught our attention.

This is the exhibition we had been waiting for, for a long time, the line up was so impressive that we thought nothing could go wrong. The exhibition is the melting pot of contemporary creative artists working in fashion, graphics, photography and art. Showcased impressive human size Chappie dolls, Silas toys, Enlightment illustrations, Futura2000 packaging for BAPE, Hussein Chalayan’s Air Mail patterns, Shiseido makeup corner etc…

In small Dazed & Confuzed Gallery the rather large format of Masayuki Yoshinaga‘s photographic work is shown. Yoshinaga’s photos of Japanese bikers are somewhat amuzing, the models are standing against a white back drop with their bikes posing at the camera. When we were in there it was very difficult to make up our minds of what we felt about Yoshinaga’s work. The photos felt very much like a Dazed&Confuzed editorial, but the moment in them was spot on.

At the department store SELFRIDGES they have launched the concept of bringing Tokyo life into their building for a month. The building has been transformed according to japanese consumer culture, if you have been to Tokyo or even Japan you might not be too surprised of what is going on in the building, like arcade games, elevator girls, karaoke box, vending-machine etc.

Outside SELFRIDGES, actually in the corner of the department store, they have ripped out some of the windows and put in a little Tokyo convenience store. The shop is rather disappointing but still sort of inviting. Inside SELFRIDGES Tokyo objects are placed randomly around the building. The selection of things is quite good, but sometimes the choices feel weird. The clothes, as usual, is extremely expensive, and the prices in the vending machines were ridiculous. When we visited the store four Japanese girls (?) where performing on a stage. One was dressed up in a Japanese high school uniform another as a drag queen. In our opinion they were embarrasing not only themselves but even to Japanese when they were singing ABBA songs. But still they seemed to get some positive attention from the shopping consumers.

Tokyo Life is more of an introduction for people that doesn’t really know much about Tokyo or Japan. Though we are not sure that they have got it right with Tokyo Life. But in London it is nice to see that people get directly affected of what is going on within the city. People have been transformed recently from all the various Japanese inputs.

But, in general, it was sad to find out that May was going to be ‘that’ mainstream.