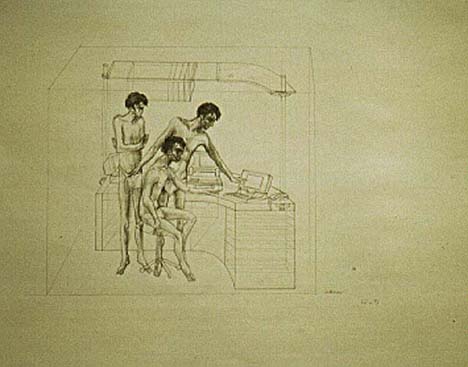 In contrast to last month’s affectionate collaboration of art and computer science – the chatterbots at C3 – April in Budapest sees a curious exhibition of paintings which show exactly the opposite: thinly-veiled hostility towards computers from an artist.

The mood of the paintings is odd, and says a lot about Hungarian separateness, the tendency of Magyar artists to stay at a distance from international art trends, follow them in parallel, or strike out on a completely different path altogether.

Janos Kosa has created an interesting set of paintings which are as self-consciously painterly as any I have ever seen. They follow formal European patterns of perspective and subject last uncontroversially championed in 18th-century illustration. Many openly mimic famous canvases, with arrays of historically-dressed figures, some in Classical togas, many in collections of people who seem to belong to Velasquez studies of interiors. The pictures are largely bare of the kind of detail we would see in a Velasquez or a Delacroix – without period furniture or contemporary tools or playthings to go with the people.

But every picture has, somewhere in the stiff, formal scene, a robot or a computer.

The pictures are less anachronistic than they seem to intend, since Kosa has rarely fixed them in one age.

A typical picture collects together elegant though slightly expressionless beautiful young women (no shortage of artists’ models for that type on any Budapest street) some in vaguely pre-19th-century wear, some in standard Greek toga-type outfits, in an room looking like the caricature of an empty artist’s studio. The empty studio could be from de Chirico, Dali, Magritte. Somewhere in this scene is a robot who is straight out of a 1950s Fantastic Tales illustration – an unironic depiction of what was already a wry joke when George Lucas put C3PO in Star Wars as the comic robo-butler. In some the look is a kind of mix of Stanley Spenser’s pre-war paintings, but without his spiritual force, and Tamara de Lempicka’s 1920s portraits, but without her stylised stylishness.

As so often with what passes for irony in this part of Europe, these ‘ironic’ juxtapositions are deadly unfunny. In one drawing, three emaciated naked men, part William Blake, part German Expressionist, are the only solid objects in a line-drawn workstation with computer that puzzlingly encompasses them with its inhuman, diagrammatic unreality.

Kosa could scarcely shout louder in each picture his labored message: computers are cold, inhuman, unpleasantly abstract and unemotional …. oh, and he doesn’t like them either.

What makes this interesting is that in many ways Hungary has been a culture at the heart of the 20th-century love affair with the computer. Perhaps as important as Alan Turing, Hungarian mathematician Janos von Neumann took time off from developing game theory to help the Princeton team create the early valve-based computers ENIAC and IAS in the 1940s.

Neumann’s suggestion that memory be held outside the processing unit shaped almost all computer design up until the days of supercomputers and parallel processing in the 1980s, and still influences construction of most computers in use today. Something about Hungary – whether it is the language’s pedantic grammar or the country’s math-focussed school education system – still produces lots of programmers.

Kosa is having none of that. Or so he thinks.

These poignantly heartfelt yet derivative paintings aim to contrast what Kosa intends as warmth and emotion with the coldness and inhumanity of the computer. But on a closer look something else is happening.

His human characters are stiff and cliched – these visual images supposed to evoke in us feelings of humanity and emotion in fact stand around in dull assemblages of borrowed imagery. The people in Kosa’s paintings are in fact as much lifeless, listed symbols as any of the code in the computing devices he hates and fears.

Any claim that this only shows how computers have dehumanised the humans in each picture should make us suspicious. If Kosa does not mean to contrast human and inhuman in each picture, if he does not mean to smuggle computer coldness into what at first look like comfortingly familiar historic celebrations of humanity, then the pictures are even more confused than they first appear. The attractive young women are clearly meant to look attractive to us – and not to look as average or dull as they actually do.

If the contrast is intended to be human versus machine, then we must ask why the people look so mechanical, and just …. unimaginatively and imitatively painted?

Kosa definitely has something he wants to say, but it is hardly a visual message.

These pictures suggest to me that in another life Janos Kosa might have been a much better machine-code scripter than he is a painter. A glance through these literal-minded, almost verbal, pictures helps to explain just why Hungary has been so weak in the visual arts and so strong in linear thinking – such as mathematics and computing itself.

Which makes the exhibition very much worth going to see. What they show about the difference between the linear and the visual is, for my money, a lot more interesting than what Kosa hopes to persuade us.