I met Etienne Mineur during my studies at Paris VIII University. He was providing graphic design lessons. He has been working as an independent art director since the beginning of the multimedia era. He achieved prestigious projects in the field of culture, such as a CD-ROM about Freud with NoFrontiere, or the CD-ROM about Proust in collaboration with Hyptique. He has just launched a creation studio, named “Incandescence“.

I have invited him today for an interview…

Please tell us about Incandescence

I am working on various projects. I’ve just finished Issey Miyake’s new web site, and I’ve started working on a video for Swatch. At the same time, I am dealing with two other projects: the designing of a packaging for a real time 3D application (Virtools) and the interface of a video game for adults. The point is to design an interface as if it had been created by a psychopath, aimed at manipulating the player (like in the movie “Seven”) ! As far as publishing is concerned, we are about to release our first CD. Last but not least, I am completing a notebook about my last journey in Japan. We will edit a booklet and a mini-CD, displaying the photos that we took during our trip. 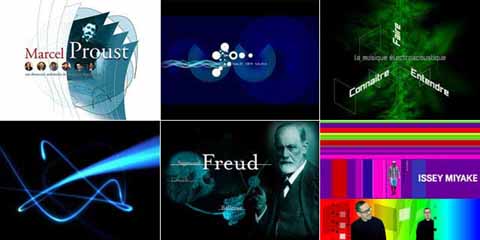 What influences do you recognise ?

As I studied at the Arts Décoratifs de Paris, I am very familiar with design history, the bauhaus, the Swiss design of course, and especially Emigre or April Greiman‘s work. I am interested in experimental animation, like Len Lye’s work in the 30-40’s, “direct film” technique (creating animation by acting directly on the film, without the camera), Norman Mac Laren’s work… I also like the brothers Whitney’s animation work using the first IBM computers, in the early 50’s.

I often find inspiration in contemporary dance and the arts of scene: the analogies that you can discover between a scene and a screen are very stimulating for me. Movie trailers are also rejuvenating, due to the work of people like Saul Bass, because there is an attempt to blend the meaning and the graphics. Besides, I gain much energy and spontaneity by listening to hardcore music.

What do you think about digital graphic design, today?

Technology and graphic design have always been closely linked. Graphic design stands at a middle point between content and technical constraints. The rule is to play with the limits so as to create something innovating.

At the moment, I think that the most exciting is the possibility to use intelligent objects (or at least reactive to behaviour) enabled by technologies like Flash, Shockwave, or Nemo. Thanks to these technologies, you can design the screen like a stage where you put graphic objects that are reactive and autonomous.

3D is still not commonly used for interfaces because it is not mature, though interesting. 3D is exciting because it allows to create links and meaning, like in the project named “Swimtank” that I did for Virtools.

You’ve been recently in Japan. What are your comments ?

As a graphic designer, Japan is really worthy! I was very enthusiastic about all the visual features in this country. Nevertheless, and although lifestyle is almost the same as in Europe, culture and mentalities are so different than in France: it is a real expatriating experience.