In Europe, ‘squatting’ is very popular. Artists settle in deserted buildings and use the place as a studio or built galleries inside the buildings… In Japan, especially in Tokyo, those movements have no reality for us, but once there was one place where maintained the movement. It’s a building called ‘Komaba dormitory’ inside the Komaba Campus of the University of Tokyo. It is said that there were those who have no school register of the University of Tokyo, artists, backpackers, and foreigners of all sorts of nationality. The building was completely demolished now. And it’s also said that there was a person who organized a gallery called ‘Obscure’ in this building. His name is Kouki Hasei. 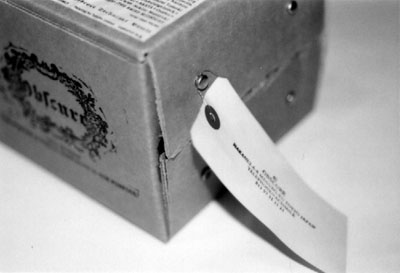 Stamp is printed directly on the corrugated cube. The tag reminds me of a parcel in old days.

Obscure Technical Vomit headed by himself has released a strange CD. They were used to be as a gallery and now had been releasing an art magazine sporadically and irregularly. It’s published only a small number of copies and used unique materials for the cover such as an iron plate. It’s a kind of multiple piece that the creator pays a great attention to the details from the cover to printing. 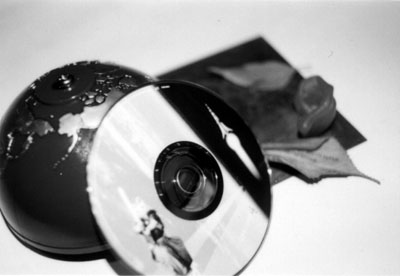 Hemisphere on an iron plate. The object of ear supports the earth. There are a CD and a few dead leaves inside.

This CD doesn’t look like a CD at all. A hemisphere of the earth goes in a corrugated cube there’s a CD inside it. It’s totally different from an existing CD package, but thinking CD as a object apart from distribution, it gives us a kind of freshness that makes us think it’s acceptable.

Many artists including Naohiro Ukawa, kujun, Woodman, Masayuki Sekine, Mai Fujinoya contributed to this cd, with reference to the film entitled “W/O” directed by Kouki Hasei and produced by Obscure. The CD is not merely the soundtrack of the film, but they each have individuality.