What is needed today is an expression with ‘depth’. The urban scene of Poland where the setting of ‘Avalon‘ is laid in looks more futuristically rather than hackneyed scenes of ‘Tokyo’. The simple and austere appearance speaks eloquently to us.

Most of the scenes in the film are changed using strong tones of color. For example, a monotone which creates a deserted feel. It also creates a suitable atmosphere as a stage for the young who are crazy over a game as seen in the opening telop. The leading character, Ash (Malgorzata Foremniak) lives in such a world and it is really excellent. His characte is shrewd, cool and stoic having something in common with the leading character of ‘Ghost in the Shell’. I wonder if it’s an image that the director enjoys. The first scene where Ash speaks her lines looking with severe eyes up at a combat helicopter is really cool and I’m sure she is the very woman for the post. At the same time, the scene shows us her ‘strength’. There are other films (except for animation) directed by Mamoru Oshii – ‘Red Spectacles’ and ‘Stray Dog – Kerberos Panzer Cops’. When I saw those films, I found a kind of director’s dilemna for expression. It’s rather difficult to realize the director’s image in the film, though it’s easy to do the same thing in animation. However, in the film ‘Avalon’, I think the dilemna was disposed of with the technology and shooting in other countries other than Japan. I could find it in his comment that appeared in the press sheet, ‘All films could be animations on the horizon of Digital’ as well. Nevertheless, the essential attraction of this film is not technology. Technology is no more than a technique, but it’s not necessarily related with intense expression. 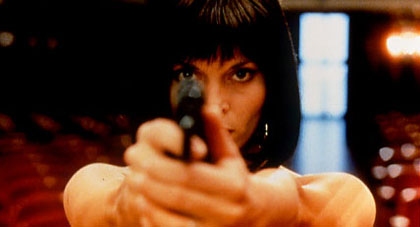 What is important is the fact that Mamoru Oshii has always scrupulously described people in his films. Works of good quality which impress viewers always have a human drama whether concretely or abstractly. This is essential to attractive works. Special effects of CG and the real combat helicopter give a strong image to the film, but they’re no more than supporting roles. When there’s too much battle scenes in a film, it only makes us a comfortable on a low level even if it’s very powerful. Needless to say, I can see Mamoru Oshii has a great insistence on arms and machines (including sound effects) in both ‘Ghost in the Shell’ and ‘Avalon’. Though the principal role should always be in ‘people’ and this film keeps balance through the whole story while he insists on action scenes.

Ash makes money by playing games, buys food, gets on a train to her home where she lives and feeds her dog. She sometimes meets her friends. It’s important to have those scenes in her everyday life. The highlight of this film is ‘everyday life’. Without it, this film would become no more than a promotional film of a virtual game. Only a small group of fans would enjoy such a film. Then, why is everyday life described? It’s because such scenes of everyday life shorten the distance between the film screen and people who see the film. Why do they need to be shortened? It’s because the world of ‘Avalon’ is linked with the world we live in. Everyday life is not as complicated as you think. Maybe it can be described within a few lines. It’s a reality, but is it a real reality? What should we think real? This film tell us the importance of recognizing reality. We have to find ‘our field (reality)’ ‘not being deluded by phenomena’. Those words say something to those who have see the film.

With the advance of technology, images in imagemakers’ minds can be visualized almost perfectly. By using technology as a tool/means, the film ‘Avalon’ has reached to a ‘deeper’ expression. There’s one result: that this film displays the tastes of Mamoru Oshii completely. I hope you take notice of those plain scenes of ‘everyday life’. There you’ll definitely find the hidden artistry of Mamoru Oshii.