This year’s Yubari International Film Festival screened a number of animations. ‘Toy Story 2’ (invitation) was one of the special-feature films, and another special one must have been ‘Jin-Roh, The Wolf Brigade‘ (made an entry to the Young Fantastic Grand Prize section). It was released in France last November and drew 30,000 people for a week. Though it won a number of awards at the overseas film festival, ‘Jin-Roh’ finally received it’s official Japanese theatrical premier at this festival. I don’t think it’s popular for the general public, but the large-scale place was full. 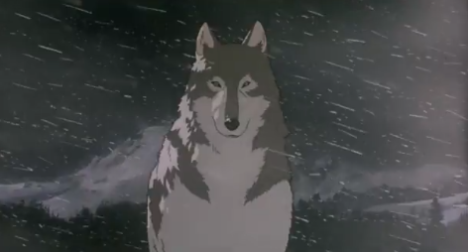 It began with a short talk by the director Hiroyuki Okiura. He looked like a shy and nice guy, not an idiosyncratic man like a creator of such peculiar film. When I knew this film was based on a concept by Mamoru Oshii, a very eccentric writer, I had a strong interest in their collaboration. His comment, “it’s not so unreasonable film, though the script was done by Oshii” made the audiences laugh. It’s a casual comment, but I think there’s some argument as a director. In the meantime the film finally started.

It was great. I would reach the conclusion first, it was really interesting and overwhelming.

“In a fairy tale, a man finishes everything, but it doesn’t go like a fairy tale in real life.”, “I’m a wolf in man’s clothing, not a man in wolf’s clothing.” The story, written by Mamoru Oshii, has a terrorist group and special command appear several times, as well as ‘Patlabors‘ and ‘Ghost in the Shell‘. I’m wondering why I’m attracted by stories without any basis in reality. 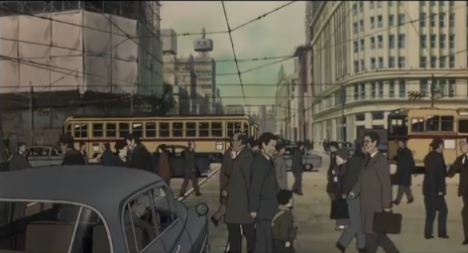 The film is set in an alternate history 1960’s postwar Tokyo. A strong armed organization which goes by the name of ‘Syutokei (metropolitan police)’ has been established to confront violent anti-government movements. The main character is one of the member of the Syutokei. One day he encounters a girl who is a member of a terrorist group. His mission is to kill the girl. But he cannot pull the trigger. And then… It must be against the rules to write more and I cannot say anything more about the story. I can only give you some hints. Go and see it for yourself.