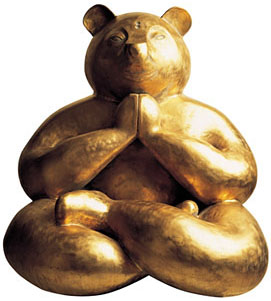 A design group led by Philippe Di Meo called RESO Design reached the tenth anniversary of its founding. As a celebration project of this anniversary, ten pieces of original objet d’art such as Bouddhours (a Buddha bear) were produced. Bouddhours is made of pure bronze cast by a purveyor store to the Louvre Museum and a history called ‘Chardon et petit-fils’.

The anniversary party which was held at Web Bar had the subtitle "Forever Young." Invited guests disguised themselves with "Reso Mask", one of the original objet d’art.

Some experimental projects using the Internet put life into the party. Guests input their names in an iMac at the entrance and they randomly became one of the 29 characters. The selected characters were falling from the sky to a planet called ‘astro 8’ which was projected inside of the bar. Then the population of the projected ‘astro 8’ grew as the guests came.

In addition, the guests enjoyed the dance clips made with Shockwave animation and the Shockwave bear slot game to get "pomme d’amour (love apple)", "sucette divinatoire (fortune-telling candy)", etc. They also enjoyed drinking cocktails of honey and cognac from a large vessel in front of Bouddhours.

For people who couldn’t go to the party, the objet d’arts were exhibited at the beautiful studio of RESO design.