How was Tree-Axis established? What does the name come from?

We initially met at FutureFarmers and worked together on a number of projects, including “Stimuli for Wonder” and Gasbook05. Shortly after we met, we started talking about creating an interactive cd-rom together, and in August we decided to join forces to help realize that goal. 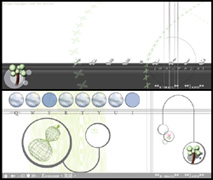 Originally we just wanted to be called “Tree” but there were too many companies with that name. So we decided to add the “Axis.”

Stella came up with the “Tree” portion of the name based on a 3d model she designed for the gasbook05 piece. When we sat down and discussed it, we found that the word was relevant in a number of ways:

B> “trees” -> “paper” -> “books” : the importance of content, especially in the multimedia world where eye candy dominates

Krister came up with the “Axis.” When he lived in Tokyo, he actually lived near the “Axis” building. We found that the techy sound of “Axis,” balanced nicely with “Tree.”

And then we discovered this: http://www.villanova.edu/~fsenweb/maya/pic318.htm

Our last project was our piece for gasbook05 and the the Codex series. We created an island inhabited by animals that have to travel through a number of mazes to try to retrieve the objects of their desires.

Right now we are finishing the Tree-Axis web site which is programmed mostly in Shockwave and Javascript. Our goal is to try and create a unique experience for everyone who comes to visit the site, while at the same time maintaining a consistent interface so people don’t get too lost or confused. We are putting a primary emphasis on multiple paths/means of navigation as a way of presenting the visitor with the same content in different ways. We also have a section of the site that we plan to use to showcase both our own and others’ experiments.

What are your goals near the future? Where is tree-axis heading to?

One of our primary goals in the near term is to get funding for, and start work on the aforementioned cd-rom, a realtime 3d game which will have more of an emphasis on story and exploration than carnage. 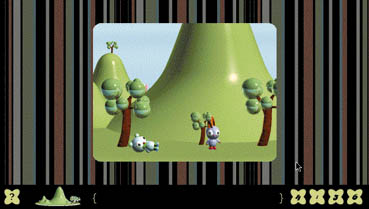 What do you think about the future possibilities of multi-media in general?

Krister: I’m very excited by the evolution of artificial intelligence. Right now it takes many many people to create rich multimedia environments, particularly in the world of 3d games. It is very difficult for a small firm to create a game even though they may have a brilliant idea. I’m hoping that in the future more AI can be incorporated into game engines and content creation tools, taking over some of the tasks that require level designers and production artists.

You have another creative unit, PANTS. How is it associated with Tree-Axis?

Krister: Basically PANTS was the name I worked under before Stella and I hooked up. After forming Tree-Axis I didn’t want to get rid of PANTS, so we decided to turn it into an imprint of Tree-Axis. On the web we will showcase our own work that doesn’t fit comfortably inside Tree-Axis (experiments and such), as well as other people’s works (for example, my sister is an accomplished photographer and I want to put some of her work up). Also, CD-ROMs and other tangible pieces of work we publish will be done under PANTS. It’s basically a way of seperating our crazy personal projects and friends’ projects from our more traditional service work.