There is a unique western style house along the Aoyama Kottoh Street in Tokyo. It used to be the house of Taro Okamoto, a prominent Japanese artist who passed away in ’96. The house has been refurbished and open to the public. 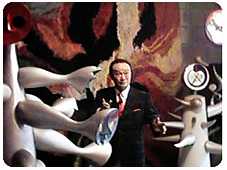 One can easily tell how he was a great artist by visiting the place and looking at his series of works.

Although most of his works have been kept at Taro Okamoto Museum in Kawasaki city which will be open next spring, the garden, atelier, living room, guest room are open with his paintings, sculpture, furniture and tableware as well.

Although Many associate Taro Okamoto with huge artworks that are placed at public areas, he was also a good designer who designed a wide variety of artworks such as mugs, chair, neckties etc as well as an author who sought for a wide range of activity in art. 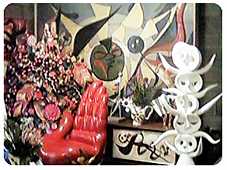 He became an apprentice to Man Ray to learn photography in Paris. Yasunari Kawabata, the Japanese novelist who won the novel prize, firmly supported his activity in Japan. Once when he was asked “What is your occupation?” “I have no occupation, but being a human being” he said.