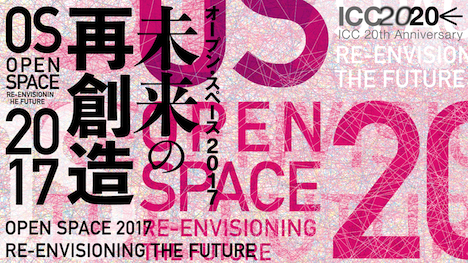 “Open Space” is an exhibition introducing works of media art and other forms of artistic expression born out of today’s media environments, to a broad audience. On display along with explanatory notes that help understanding the respective pieces are leading works from the realm of media art, artworks incorporating cutting-edge technologies, works with a critical standpoint, and in addition, projects that are currently in progress at various research institution. Next to presenting works to view and enjoy, the exhibition was conceived as an occasion for visitors to think about backgrounds and contexts such as today’s diversified forms of media and communication, problems in contemporary society, future prospects, and in addition, new sensibilities and aesthetics.

In the year of the 20th anniversary of the opening of ICC, the 12th installment in the series, titled “Open Space 2017: Re-envisioning the Future” and themed around creating new future visions, looks back on the past two decades, while at once reflecting on what kind of future we might be able to propose for the decades to come.

Also on the schedule during the exhibition period are a number of related programs including talk sessions, lectures, symposia and workshops with artists and experts, as well as guided tours around the exhibits with explanations by the curatorial staff.