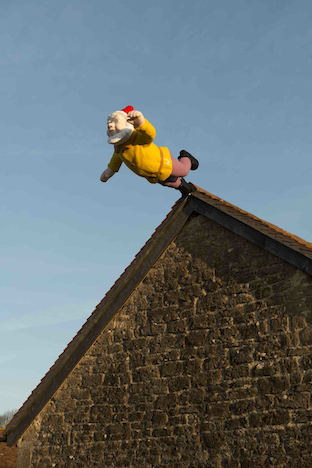 A solo exhibition of Djorjde Ozbolt will be held at TARO NASU from April 8 to May 13. Djorjde Ozbolt is known as his characteristic way to combine the cultural, historical or religious motifs into his work as the artist dare to disrespect their own backgrounds. Being free from the established culture and values, Ozbolt playfully breaks the history and cultural discrimination.

Dealing with the conflict between eastern and western culture and social problems in this era of globalization, through his humorous and witty presentation the artist’s works are considered as an icon, predicting our uncertain future in the end of this multiculturalism.

In this solo show, we will showcase his new paintings, gnome figures and Netsuke sculptures. The gnome figures were produced in Serbia in where the artist was born. In his latest show in Somerset, those gnome figures were placed like that they are marching from the outside into the buildings, as if it implies the immigration issue in Serbia. For this time, the Serbian gnomes invade farther Eastern city, Tokyo.

Netsuke, traditional Japanese wooden miniature sculpture, is often described as a micro cosmos in the palm of hand. Ozbolt enlarged Netsuke dozens of times in vivid colors. The artist found existing Netsuke in the Japanese antique market to make concrete casting sculptures. Rebuilding the formative art Japanese craftsmen has been developed from Edo period, the artist deals the axis of time while the gnome figures refer the axis of cultural border.

The space and time, cross overing two axis, Ozbolt warps the exhibition room to question our own sense of values.