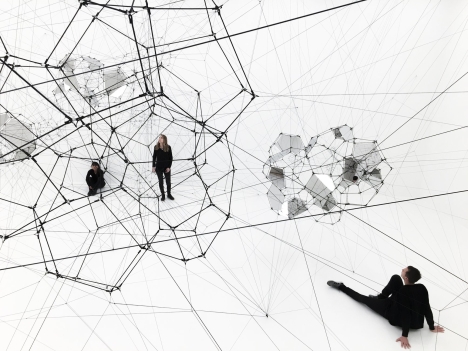 An exhibition Tomás Saraceno “Stillness in Motion – Cloud Cities” will be held at the San Francisco Museum of Modern Art (SFMOMA) until 21st May, 2017.

Tomás Saraceno’s immersive installation works are visually arresting spaces that challenge viewers’ relationship to the built world. Stillness in Motion — Cloud Cities offers a model for the utopian cities of the future, conjuring an era in which humanity ceases to negatively impact our planet’s fossil-fuel resources, and instead becomes airborne in collective sustainable environments.

In this exhibition, visitors wind their way through and below an array of cloud-like, geometrically complex cities, suspended in the air by tethers connecting the structures to the gallery walls, floor, and ceiling.