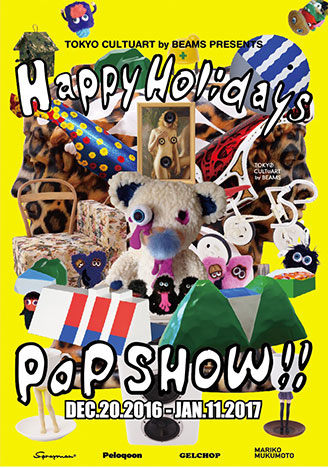 The group exhibitions of formative artists from four units who are active both in Japan and overseas will be held on December 20th this year until January 11th next year at TOKYO CULTUART by BEAMS.

The exhibit artists are following: GELCHOP, the 3D modeling group of three people who love crafts, the painter Masataka Kurashina who customizes anything he wants, Mariko Mukumoto who creates a three-dimensional works with a motif of landscapes managed by people, and Madoka Morikawa a.k.a. Peloqoon who is a hand stitched stuffed animal artist.

Although the methods of their artworks such as paint, three‐dimensional shape, and craft are different, don’t miss their stand out expressions full of individualities with the common theme “pop”.