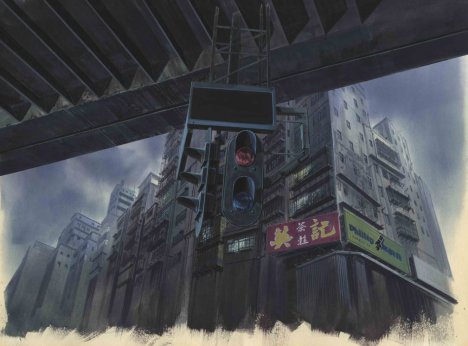 The new temporary exhibition “Anime Architecture” at the Museum of Architectural Drawing in Berlin shows original drawings from renowned Japanese animation films, until October 16th. Since the films “Akira” (1988) and “Ghost in the Shell” (1995), Japanese anime has secured its place in international pop culture, attracting a growing public in Germany.

The show focuses on a selection of superb renderings of urban architecture made for the screen. In drawings for the films “Patlabor” (1989), “Ghost in the Shell” (1995) and “Ghost in the Shell 2” – “Innocence” (2004), the megalopolis skyline is seen to be crushing in on what remains of traditional wooden housing. Industrial sites with endless labyrinths of cables and piping and utopian science-fiction constructions form backdrops for the dynamic film plots.

The exhibition presents works by Hiromasa Ogura (art director), Mamoru Oshii (director), Atsushi Takeuchi (layout) and Takashi Watabe (layout). These artists belong to a generation of illustrators who drew animation films almost only by hand. Although today computer graphics are additionally used across all areas of production, paper, pencil and brush remain their essential tools. The exhibited works demonstrate the four stages in the creative process of developing a background image: setting, image board, layout and background.