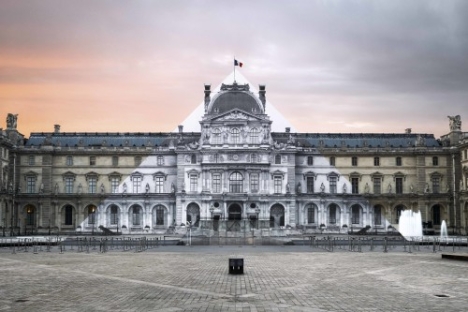 JR has chosen the biggest gallery in the world to showcase his art: public spaces. Installation on the Louvre Pyramid “JR at the Louvre” is held until June 27th.

For some ten years now, the artist’s monumental photographic collages have been popping up on the walls of cities in all four corners of the globe. “The most important thing,” he explains, “is where I put my photos and the meaning they take on depending on the place”.

Whether it be the Middle East, the favelas of Rio, slums of Kenya, New York, Le Havre or Shanghai, JR’s works leave no one indifferent, because they return our gaze and cut to the very heart of our innermost selves. His spectacular mode of intervention poses questions about artistic creation, the role of images in the age of globalization, and their widespread use, from intimate circles to mass distribution.

Invited by the “biggest museum in the world”—which also generates the most selfies—JR has set his sights on one of the Louvre’s symbols, the Pyramid, which he intends to transform with a surprising anamorphic image. He says, “Art allows us to call into question our visual and intellectual points of view.” Let’s see the world he produced.