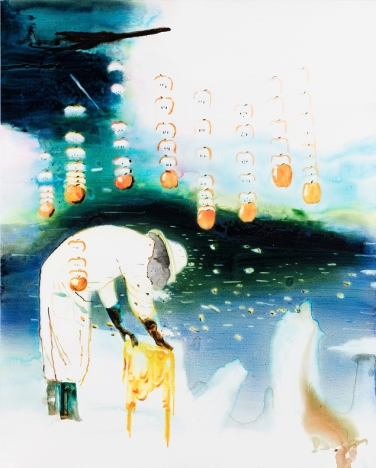 Victoria Miro in London holds “Apple Bombs“, an exhibition of new paintings by the Copenhagen-based artist John Kørner, till May 14th. With Kørner’s trademark lightness of touch and painterly dexterity, the work oscillates between external realities and the subjective textures of experience.

Painting, for him, serves the unambiguous, if impalpable, function of exercising the imagination much in the same way as a bicycle stretches out the legs. The artist’s previous work has variously taken the situations of sex workers and Danish soldiers killed in combat in Afghanistan as points of departure, alluding to its topical content with various degrees of abstraction and metaphor; in this exhibition, aspects of contemporary geopolitics including imbalances of wealth and the displacement of populations are obliquely problematised.

Rather than predetermined allegorical narratives, the paintings in Apple Bombs present a constellation of seemingly incongruous pictorial elements in which the viewer is caught up, setting in motion dialogues concerning wellbeing, human relationships, consumption and survival. Illuminated by flashes of negative white space, these paintings sustain an unresolved quality that leaves plenty of room for the viewer’s imagination.