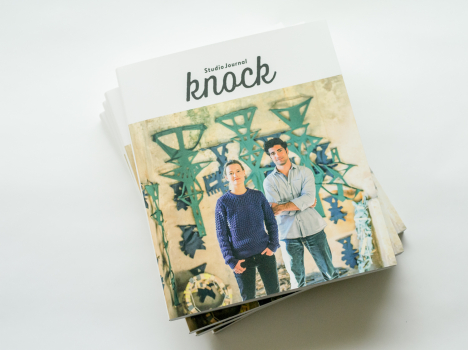 The 5th issue of Studio Journal knock titled “Europe” has just released on February 20th. The magazine is created by Isao Nishiyama, a photographer and graphic designer and his wife Mami who have been traveling for 2 years and visiting artists’ studios and homes around the world as they pursue the origins of artists’ inspiration.

In the latest issue, Isao and Mami traveled through the countries in Europe such as Paris, A Coruña, Rennes, London, Moscow, Corsica Island and Ortisei and focused on the artists’ ordinal life approaching the secret of their creation.

The special article is about French artist duo “Forlane 6 Studio” who create ingenious art installation underwater as they live with the ocean. It is a magnificent story dramatically written from the first encounter at Forlane 6 Studios’ home in Brittany to meeting again in Corsica Island on the middle of Mediterranean sea. This is the real documentary follows the process of their breathtaking art installation underwater on the beautiful Corsican wilderness.

Studio Journal knock is a visual journal that documents the daily life of artists around the world. By journeying into the background of their art, we discover the source of their inspiration. Take a glimpse of their true process, one which you could never see at a glamorous gallery opening. These are the raw and unaltered faces of artists deep in their various stages of creation.