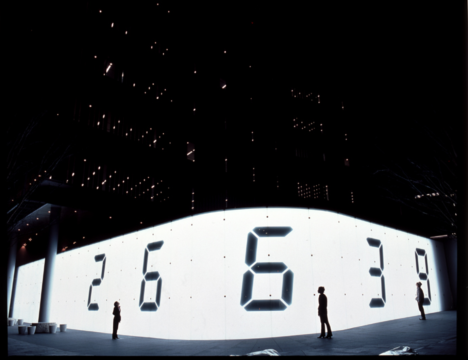 One of public arts by Tatsuo Miyajima “Counter Void” which has installed in Roppongi Hills, 2003 will be relighted only 3 days for the first time in 5 years, as a project “Relight Days“. The work refers to the “life and death” of human beings, which is represented by digital counters.

On March 13th; 2 days after of The Great East Japan Earthquake, by the intention of Miyajima, the light of the work has been extinguished with the meaning of great requiem for the victims. He says “passed 3 years after the earthquake, I felt ashamed that everyone is going to forget the world after the disaster. At the same time, coming up a voice as ‘could you please turn on Counter Void again?’. Then I thought and launched the project to respin it.”

This project includes various feelings such as to share the meaning of “the extinguishing” and “the relighting”, and to rethink the world after the earthquake with many people, while turning up again the same 3 days only. During the term, some participatory programs and talk session will be carried out.