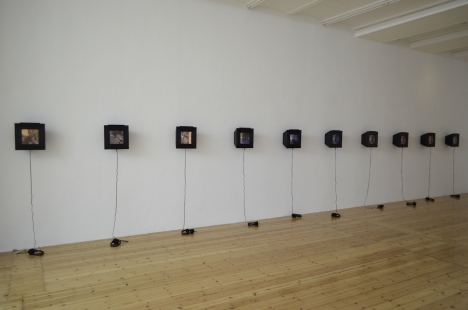 Sfeir-Semler Gallery in Hamburg holds Rabih Mroué’s solo exhibition “I was fortunate not to have seen what the others had witnessed“. He, born 1967, lives and works between Berlin and Beirut.

Since his first solo show in the gallery in 2010, Mroué has emerged as a leading visual and performance artist, most notably participating in “DOCUMENTA” (2013) with a multimedia installation, as well as winning the prestigious Spalding Gray Award in 2010. He has created a few hundred miniature collages of the war and diaspora from current newspapers that the viewer has to peer into to see –further emphasizing the testimonial role of the mass circulated image.

The show includes prints that have been covered only for the viewer to unveil, and videos that can only be seen and heard with the spectator’s intervention.  Mroué presents three new video works, each deconstructing the complexity of civil conflicts into the anecdotes, eccentricities, and personal struggles of the people living it. The exhibition creates a dramatic space for the viewer to have a dialogue with the stories and images presented.