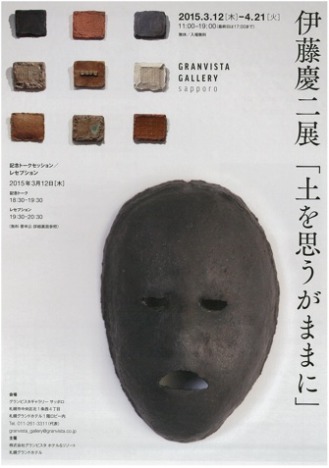 From March 12th to April 21st, Keiji Ito Exhibition “Soil: To My Heart’s Content” will be held at Granvista Gallery Sapporo.

He sticks to his principles, “Me, all alone”. He doesn’t open his head so much as if only his works would be himself. His sublime consciousness for ancient times and gods exists in his works. Also they are seemingly monotonous. However, we can find secret attraction that has both strength and warm heart of earth because his works represent earth itself simply in essence. work is rooted in the Japanese soil; its originality and contemporary dimension give it a universal value. He feels the need to the essential. For the ceramists this is the clay itself, unadorned, natural, and truthful in its simplicity”. This time, exhibiting 4 works as “Face”, “HIROSHIMA- clay”, “NAGASAKI- Mask” and “Moment Closed”, as it’s first landing on Hokkaido.