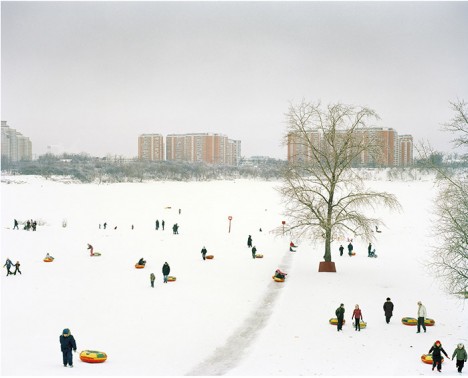 At YUKA TSURUNO GALLERY, Alexander Gronsky‘s exhibition is held till October 25th.
He is notable for his photographic practice forces on landscapes of contemporary Russia, and his works are shown internationally. After the career as a press photographer in Russia and the area of the former Soviet Union since 1999,

he came to focus on documentary works from a point of his personal view since 2008. Refering to himself as a landscape photographer, he focuses on vast spaces and investigates how local populations are impacted by the surrounding environment.

In this exhibition, his main series will be shown, including Less than One (2006-2009) centered on the sparsely populated and isolated areas of Russia, The Edge (2008-2009) which he explored the snowy fields surrounding Moscow, where there are many apartments built in the age of the Soviet Union and Pastoral (2008-2012) which he photographed activities of local people in the fringes of Moscow, the suburbs between Russia’s most populous city and the countryside that surrounds it.