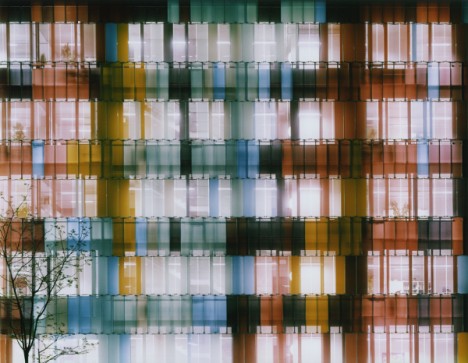 The Finnish artist Ola Kolehmainen (b. 1964, lives and work in Berlin) traces the great architects in his photographic work at Haus am Waldsee. Not only the architectonic monuments of European Modernism built by Alvar Aalto, Mies van der Rohe, Frank Gehry, Sauerbruch Hutton, but also the Hagia Sophia or mosques built by Mimar Sinan from the 16th century, serve as the starting point of his reflections.

Kolehmainen earlier work is stimulated by the geometric structures of façades, the grid design of ceilings, their reflective windows of the selected icons of building history. At the point where nature meets architecture in the form of reflection, his minimalist, aesthetic practice, which was strongly influenced by James Turell and Carl Andree sets in.

It thrives on both structure and the chromaticity of architecture, building history and the site-specific light. “Geometric Light” one of his most recent series are recalling the constructivist paintings of for example Paul Klee or Frantisek Kupka as well as the transparent objects of Naum Gabo.