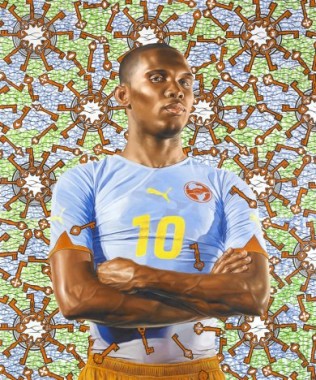 The Los Angeles County Museum of Art (LACMA) presents Fútbol: The Beautiful Game (February 2-July 20, 2014), an exhibition examining the sport of fútbol, or soccer, as it is known in the United States. Featuring approximately 50 works by nearly 30 artists on the subject of fútbol—often referred to as “the beautiful game”—the exhibition looks at issues of nationalism, identity, globalism, and mass spectacle as well as the shared human experience between spectators from a multitude of cultures. In anticipation of the 2014 World Cup that takes place in Brazil this summer, LACMA’s exhibition considers the sport through video, photography, painting, sculpture, and large-scale installation.

The exhibition examines football—nicknamed “the beautiful game” by one sports commentator—and its signficance in societies around the world. As a subject, football touches on issues of nationalism and identity, globalism and mass spectacle, as well as the common human experience shared by spectators from many cultures. Celebrating the sport on the eve of the 2014 World Cup in Brazil, the exhibition includes approximately thirty artists from around the world, working in video, photography, painting and sculpture. Two room-sized video installations—Zidane: A 21st Century Portrait, by the artists Philippe Parreno and Douglas Gordon, and Volta by Stephen Dean—anchor the exhibition. Other works by artists including Miguel Calderon (whose 2004 video Mexico v. Brasil represents a 17-0 victory for Mexico), Robin Rhode, Kehinde Wiley, and Andy Warhol provide a sense of the miraculous possibilities of the sport as universal conversation piece.