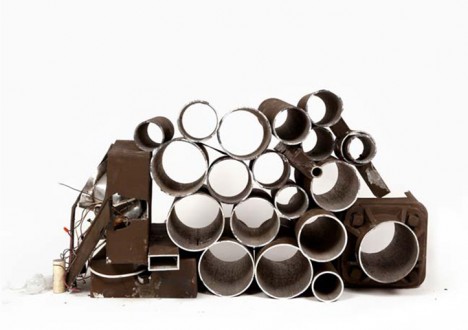 bitforms gallery is pleased to announce Retooled Appliances, the first solo exhibition in the United States by artist Michel de Broin. Based in Montréal, de Broin is the 2007 recipient of the Sobey Art Award, and is best known for interventions and his re-functionalization of utilitarian objects.

Rooted in conceptual premises, de Broin’s work generates unexpected levels of complexity from found objects and physical juxtapositions. Established modes of signification are left behind, yielding retooled technological environments and new possibilities for public space. At times, his ingenuity can be nearly indiscernible upon first glance, appearing as a puzzle for the viewer to complete. For example, “Shared Propulsion Car” is a human-powered 1986 Buick Regal that de Broin modified furtively. During the Exit Art biennial in 2005, this revolutionary work was driven through Manhattan, presenting challenges to mid-town traffic, despite its petrol-free combustion.