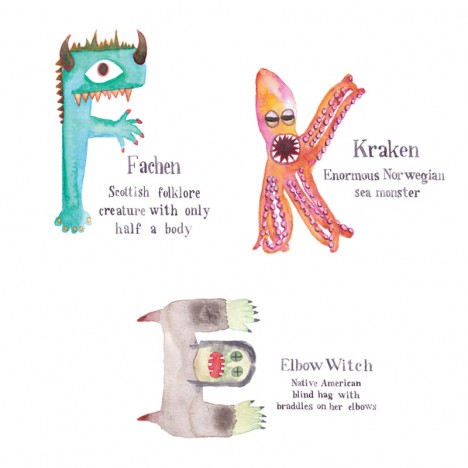 UK based artist Sarah Doyle launched two new typography projects. She is an artist who made online greeting cards on SHIFT and made artworks for SHIFT calendar before.

The Alphabet of Mythical Animals, from the Axex to the Zombie there are literally 100s of Mythical Animals to choose from. This project was created as a typeface for anyone interested in mythology, magic and beasts. The Animal Alphabet, this idea started as a project to help her 2 year old son associate letters of the alphabet with common animals. Together they decided which animals to choose and created dozens of letters that eventually became this alphabet.

Each animal is hand painted to represent a different letter of these memorable picture alphabets. The posters are now available as A2 Giclee prints on her shop.