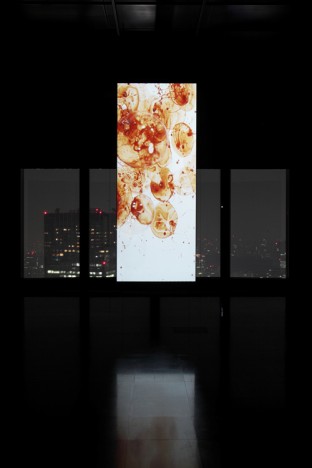 Motohiko Odani (born in 1972, Kyoto, Japan) is undoubtedly one of the most important Japanese contemporary artists of his generation. Frequently invited to exhibitions and biennials all over the world, he was selected in 2003 as one of two artists to represent Japan in the Japanese pavilion at the 50th Venice Biennale.

More recently, he had a mid-career retrospective exhibition at the prestigious Mori Art Museum in Tokyo from November 2010 to February 2011 – which closed just two weeks before the Tohoku earthquake hit Japan.

For this exhibition at Fotografiska, his first presentation in Sweden, Odani decided to go back to where he started. The central part of the exhibition is comprised of the Phantom-Limb series – his first major work, which he describes as embodying “all the elements of my later work” – including the original version and newly-recreated pieces for this occasion The rest of the exhibition was structured around it, with an unprecedented abundance of symbolism and metaphor.

Most importantly, his thinking has been profoundly influenced by the Tohoku earthquake on March 11, 2011, which completely devastated Japan’s Tohoku region where more than 18,000 people lost their lives and a third million their homes. In the aftermath of the disaster, travelling around the region that was washed away by the tsunami, Odani came to the conclusion that he must do something as an artist began by deciding to reset himself. Moreover, the sense of existence conveyed by the mountains of debris after the disaster completely overwhelmed him, simply because he realised it exceeded anything he had been trying to achieve in his career by making sculptures.

The title Time Tomb denotes the sheer enormity of the disaster, that everything, including time, has been irrevocably buried. In addressing the disaster, Odani confronts that fundamental Japanese elements of his own nature, with the polarisation of order and chaos, and hopes that this will resonate in people and help create an understanding of a reality that concerns us all equally after the disaster at Tohoku.