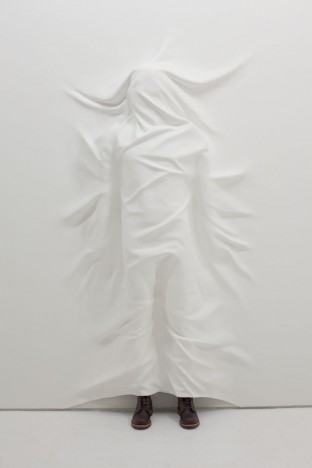 From two-dimensional work to sculpture, installation, public art, and performance, this New York-based artist produces occasions to (re)consider architecture, the natural world, and the manner in which they interact. The fall, the ball, and the wall, Arsham’s first solo show with OHWOW, illustrates the artist’s continued interest in manipulating architecture and in challenging expectations of accepted realities.

Arsham presents three bodies of work, revealing his diverse artistic practice and the progressive manner in which he approaches his subject matter, chosen media, and the surrounding environment. His structural interventions that cause walls to appear in a state of flux, as if they are melting or dripping, reverse the notion of architectural rigidity and of a partition’s standard presentation.

With a new series of work on canvas, he depicts realistic building constructions, which include elements that spell out words, such as “oops.” A large-scale, hanging mass of tinted spheres, from the set of Merce Cunningham’s final performances, is a three-dimensional sculpture based from the pixels of a hyper-magnified photograph of a cloud formation.

His aestheticized sculpture and installations realize hypothetical architectural elements and counterintuitive designs, queuing possibilities and coercing material to behave atypically. Whether through his solo creations or collaborations with architects, choreographers and dancers, Arsham presents work that possesses visual drama and minimalist aspects; measures of solid intention and moments unrehearsed; signals of human progress or an entropic future.