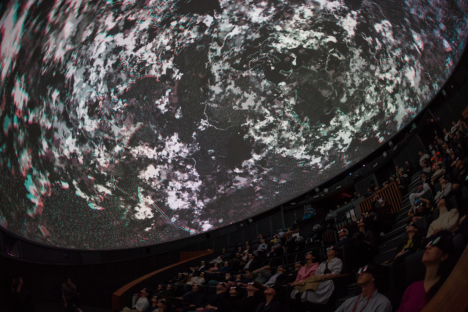 At the Dome Theater, as a popular program of MUTEK.JP, audiences can see a variety of audiovisual works by local and International creators on a large sphere screen for 3D viewing. A 30 minute audiovisual work “Noesis” by a media artist, Shinichi Yamamoto, and a musician, Tetsuji Ohno (Intercity-Express) approaches nature and the laws of the universe from the perspective of the art and extracts the spatially constructed video to different devices to experience new perspectives with themes such as “being wrapped in nothing,” “sedimenting time” and “landscape from inside the earth”. Audiences get immerged with the impressive ideas of the work features the original sceneries of the Earth such as sea, glacier, desert where artifacts do not exist, and images that the lines appearing in a way similar to lightning bolts spread out like the vein to the whole screen and countless dots fall from the sky like rain. 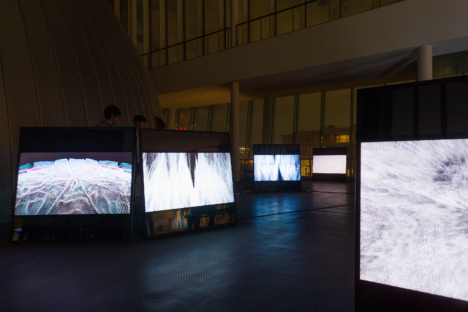 Around the exit of the Dome Theater, Wakita Rei, a professor of Keio University School of Environmental Information and also an artistic scientist, whose live performances at MUTEK.JP 2017 gathered a big attention, displays a digital installation “HOMOLOGY” using living space display “AMP – Ambient Media Player -” which is being developed for commercialization by Panasonic Appliance Company Game Changer Catapult. “Homology” or “homophobic” is a technical term used in mathematics and biology, and refers to the structural, functional and morphological similarity between objects. For mammals, for example, whether it is a human being, a cow or a cat, the head, torso and limbs are connected as the same phase, and paying attention to the internal structure, there are bones and muscles that have similar functions. This work reinterprets this concept from a broader viewpoint and investigated to the extent of converting commonality to perception state through visualization and simulation. The installation had a strong sense of presence in unusual dark space, Miraikan, that is unique to MUTEK.JP. 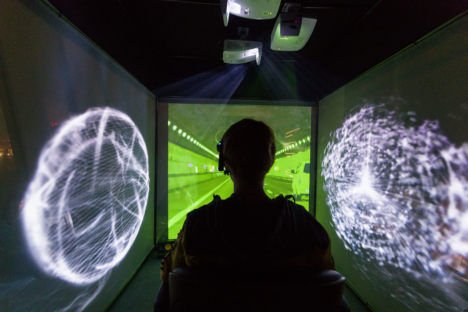 “NO – ON expression of internal music by brain waves”, the instantaneous creation of sound in response to brain waves, is an interactive art by a creative group konel which has skilled creators such as engineers, designers, producers, directors and musicians from Western countries, Southeast Asia and Japan. “Could there be times in which we experience emotions that can’t be expressed with words ? For example, the sunset that repeats itself the same way everyday suddenly tugs at your heart. The word ‘sorrow’ alone doesn’t describe the feeling, or more so, no words seem to describe the feeling. In moments like this, what would happen if we were able to release these emotions as music using our brainwaves? What would happen if you obtained a way to express and share your emotions to others?” These ideas are concepts to develop this brainwave composing device. The way it works is that a person sits on a chair surrounded by three screens with an electroencephalograph, and music will be generated with data from 6 types of brain waves, meditation and attention parameters caused by the visual stimulus from the video on the screens. 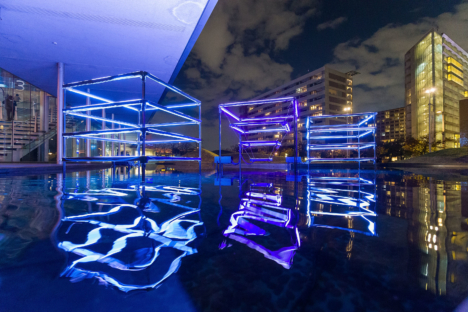 Not only works and programs, but also the presence of lighting, art set up in every corner, such as the entrance and the stairs and floor landings are impressive, also played the role to raise visitors’ excitement for things to encounter and experience. MUTEK.JP is an outstanding unique event that is not equivalent to other music festivals and contemporary art exhibits. Also, using the science museum as a venue makes MUTEK.JP a unique and unusual space that is not a similar experience neither at night clubs nor at art exhibitions. After three times happening in Tokyo, the event will continue to make new challenges in the future and further evolve and change. MUTEK.JP will keep amuse people as it continues to intersect with the unique culture of Japan.