In 2009, Fuyuki Shimizu started his brand Carton, making wallet from cardboards left on the road and shops of all over the world, and now he is an artist who symbolizes the current world. He adds a new value to used cardboards. This moment, which trash turns not trash by the paradigm shift, makes us excited.

His business is multiple; he had workshop and lecture in America and China, and collaborated with North Face, MUJI, and Lexus in Japan. End of last year, documentary film about himself will be released. In this interview, he talked about his love to cardboards and his activity. 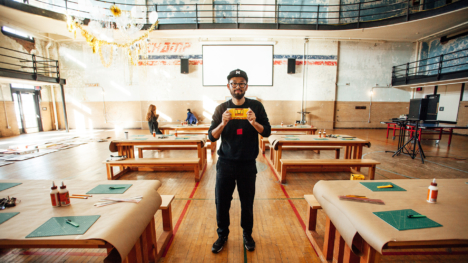 There are many other packages. Why did you choose cardboards? Is there any reason that you have to use cardboards?

When I was art student in 2009, I made wallet from cardboards for the first time because I did not have money to buy it. I needed one anyways and then I found cardboards in my house and the idea of making wallet from them came up. So, I did not have any reason that I had to use cardboard for the first making. But, I gradually realized that each cardboard has different story while I collected them and I became more fascinated by it. On the physical process of production, cardboard is strong enough and better than other package materials. 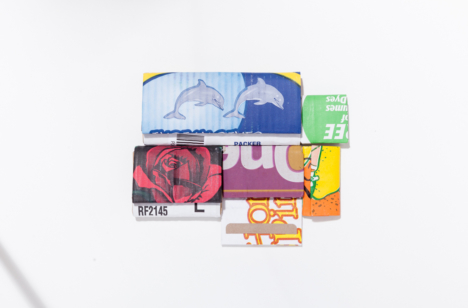 Why wallet? Did you try any other shapes?

I chose it because people bring it everyday. But, I also tried bag and hat. I wasn’t satisfied with design of hat for everyday use. The idea of bag does not reach our criteria due to the problem of waterproof. On other other hand, you can wash by hand and dry wallet even though you had better not soak it in water.

It seems more durable than I thought.

Yes, it was another discovery that it becomes more durable by care and repair. When I made the first one, I expected that it lasts only for one month. But, now you can use it at least for two years. Among my customers, there is one who has used it over 7 years and the person still keeps using it. Also, I can repair and change old or broken parts. Then, it will last more.

Possibly, it has the same durability as leather wallet.

Exactly. I was surprised by the unexpected discovery.