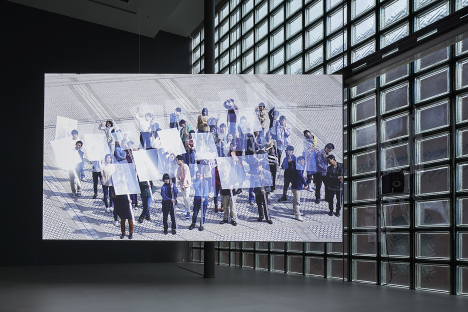 It is a consecutive work of “The landscape is Changing” (2003), which filmed people doing a demonstration-like march in different locations of Albania. “Adjective to Your Presence” was filmed in Tokyo and people in the march hold transparent placards. Although generally video work is projected in the dark room, he stuck to the transparency of the glass blocks and used gray films, which do not completely shut the sunlight.

Demonstration is expression of the political approval, usually done in pubic space on National Founding Day, for him who grew up in the socialist nation. However, he experienced a different type of demonstration, which protests issues, after he moved to Paris.

The transparent claim on the placard represents the march of many people holding the same thing already has a message even without shouting a slogan. Transparency stimulates each person to understand what he or she wants to say. What is important when you talk about a person is not who he/she is, but how the person is. That’s why adjective is the key. 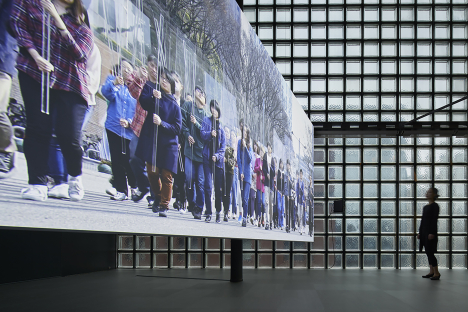 He did not only specify particular facilities and regions of 16 locations for the film, but also gave keywords of concept like education, religion, and politics. He and his crews filmed those locations, which matched with the concept and allowed them to take a film.

He did not order anything to marching people and edited films later with his sensibility. He has great curiosity. He responded to many things while filming and never stopped questioning. He said “I was surprised that Japanese people did not say ‘what are you doing?’ while we were filming.”

The point of how to enjoy this show is paying attention to the change of impression by sunlight. Especially, “Breath separator” looks different at morning, afternoon, and night. The glass blocks are made of a material, which creates diffusion, and neon light from Ginza affects the blocks at night differently from morning. It is better to check not only one time, but more in different seasons and time.

You can be a part of the floating air and find the answer to what your mind responds to the transparency.