The Swedish independent art fair Supermarket celebrated its 13th edition this April 12th – 15th. The overarching theme of Supermarket 2018 is ‘Legacy’. The word ‘Legacy’ is interpreted as a question of what will remain once we humans are gone. For this year’s edition, the fair has moved to the meatpacking district (Slakthusområdet) in the south of Stockholm. This is an industrial area that is changing dramatically – they are building a new neighborhood as you read this – becoming one of the newest residential areas in town with new places to eat and hang out. The venue at Supermarket gets notable only as you come closer to it. The entrance is a tunnel, which connects to the actual venue, so not until you get inside it is possible to grasp Supermarket’s vibrant atmosphere. As a matter of fact, this edition has attracted record attendances. More than 150 artists exhibited this year. Although these are artist-run spaces working individually the spirit of the fair is very collaborative. Group discussions, talks, performances, and workshops are held at Supermarket where artists help each other. This art fair started in 2007 as a ”reaction to the new commercial art fair Market”. The core of the fair thus is less focused on the commercial aspect committing selling figures but more about the international meeting between the artists and the visitors. It works like an art hub and a networking place for both Scandinavian and international artists. 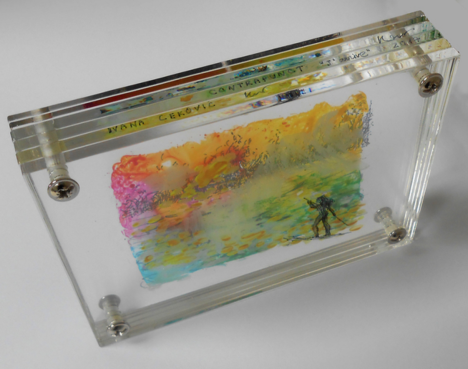 This year attended 53 artist-run sort of artistic collective or independent art galleries from all over the world, all with different attitudes, own distinguishing art forms of working. Musel Link asbl MIMO project space (based in Aspelt, Luxembourg) was showcasing miniature art whose works of art must fit one hand: 2D maximum 10×7,5 cm (frame A5), 3D maximum 10x10x10 cm, and video art should not exceed a duration of 1min 30sec. Member artist Ivana Cekovic has painted with acrylics on glass. On one of the miniature sculptures called Contrapunctus, the colors pink, yellow, green and blue. Its bright and a woman is standing on a raft or a piece of word rowing in the ocean towards the sunset. Because of its size it almost becomes mystical and intimate as you can hold the piece on the same time as it seems far away. 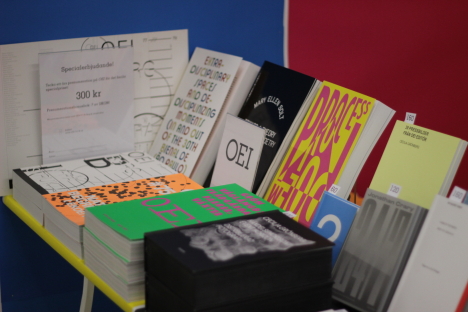 Experimental Stockholm-based magazine OEI in difference to other exhibitors at the fair publishes books intended as experimental forms of thinking, montages between poetry, art, philosophy, film, and documents; critical investigations, editorial enunciations, aesthetic technologies, non-affirmative writing, speculative archaeologies, new ecologies and alternative historiographies. They publish four issues per year. The latest number of OEI is called #79 Redigera/publicera/distribuera (Swedish for Edit/publish/distribute). Cecilia Grönberg and Jonas Magnusson, who run OEI, mentioned they often work with many journal issues at the same time, they have a vast experience experimenting with formats and the process of making each journal, , design and print techniques – for instance a few years ago they run an issue about 4 kilos weight, which was very complicated to be distributed worldwide in the regular post format. Nevertheless, this kind of constrictions do not stop them to pursuit the core of experimentation. It is not commonplace for OEI to gather collaborators from different interdisciplinary art fields. Each journal has a new theme; hence they curate a new team of collaborations related to that theme. That creates the opportunity of a democratic approach to each issue.