Probably, the most fresh works by both members and viewers were by Motohiro Hayakawa, besides Makito Takagi. A new character “girl” was fighting on his pieces.

Wasn’t it the first time to show a girl with this new style? Why did you decide to draw her?

Hayakawa: it’s pretty simple. I just decide to draw girl for Outer Side 2. I tried that because I wanted to make a brand new theme. I tried to make her less emotional. The story is about a girl fighter in various situations.

The glitter and colors which you used were different from before and it was more pop and feminine.

Hayakawa: I used the glitter as images of female nail art to make it feminine. About colors, I tried to make a background whitish and characters more colorful. 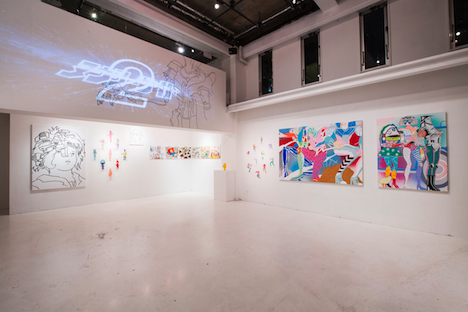 Each individual’s originality pushes to change “OUTERSIDE” without being dominated by the theme of “monster” and “superman.” What’s the next creature for “OUTERSIDE”?