With Bob Dylan receiving the Nobel Prize in literature recently, it seems that your timing for such a project is quite relevant.

Ha ha ha. Well, I’m certainly no Bob Dylan but the timing was indeed serendipitous. Dylan takes up a lot of social and philosophical issues in his lyrics and one can really feel the poetic power. I believe that music can truly enhance a poem and the other way around. It’s very human. It gives us insights into the inner workings of our minds and the human condition. It deals with issues like masks and the different rolls we play. At its best, this can lift people up – it’s like a lighthouse of life for us to contemplate. I hope that some of the tracks and poems in the Rio Negro project will inspire others.
Speaking of poetry, I should add that I’m deeply indebted to Californian musician and poet Darius Degher who encouraged me to do something more with my first draft of poems. Without his enlightened vision and energy, my poems might have stayed in the chapbook.

What was the biggest challenge you faced on the project?

Probably the most difficult part of this project was to get the poetry and music to match in a good way. It was something that grew and evolved organically. I see this a bit like composing the score for a motion picture. Poetry can be as immediate as a video or movie so the music comes in to embrace what is behind the poem, and the other way around. You need that chemistry. And until it felt just right I didn’t stop arranging and tuning the composition and writing, constantly adjusting my approach to best express the poem musically.   I’ve done this for my own sake, and no one else – a kind of personal journey. Recording at EMS was a huge inspiration as well. They have an amazing library, so when taking a break between recordings it was perfect to pour some tea and go and read some inspiring stuff. It definitely affected my mood. So even though I’d written the poems in advance, the music could be influenced when I left the room for unexpected events. I guess that’s the magic we all love to talk about. So, yes, EMS is a very special place and it was my bubble of isolation for some months. But curiously, once that recording part was done, the process turned into the opposite – bringing it to the next level from the perspective of a total outsider to phase one. Now it’s all about sharing it, and it continues in this way. 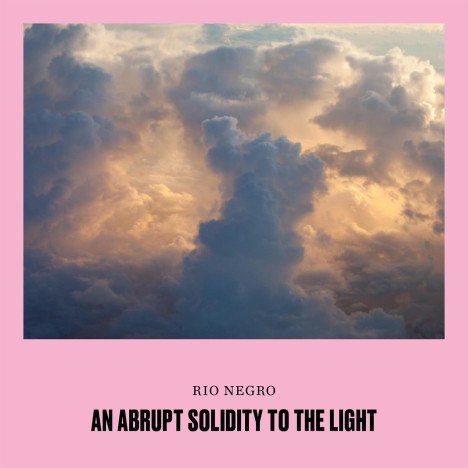 In closing, I noticed that the cover of your EP is a photo of clouds by the famous German photographer and artist Wolfgang Tillmans. Is there a thought behind this?

I was extremely fortunate and lucky that Wolfgang donated this photo to the Rio Negro project. I had met him in another context and when I explained what I was up to, he was happy to donate this photograph. I wanted my friend Jacob Huurinainen to do the cover of the EP. I love his sensitivity and eye for visual communication. After listening to some of the first mixes, he suggested going with an abstract, dream-like feeling. This immediately triggered a vision of smoke in my mind. I love that, ha, ha. No seriously, I’m fascinated by the shape smoke acquires – that density, like the mists, that atmospheric vibe. So this photographic image by Wolfgang with the cloud formations popped into my mind right away. When Wolfgang then told me that the title of the photo was called “Lux” or “light” in Latin, I thought, wow, this is so appropriate. Below the atmospheric clouds it’s all darkness, and then you rise above them into the light. There is a sense of divinity and eternity that, to me, captures the same spirit as the poems and music.

So what’s next for you?

I really don’t know. Honestly. Let’s see where all this leads. I have some ideas and some “work in progress” with new poems and compositions that I would like to expand later on while I’m preparing myself to have a chance to perform “An Abrupt Solidity To The Light.” It could be as part of a live touring show or even an installation. The truth is that the way we experience music today is changing, largely due to new technology. As an example, I recently read that cafe-bar style “listening clubs” in London are enthralling audiophiles. I like partygoers and there is certainly an audience devoted to this kind of hi-fi musical appreciation. I’m preparing my show in this direction. That’s really my focus at the moment.