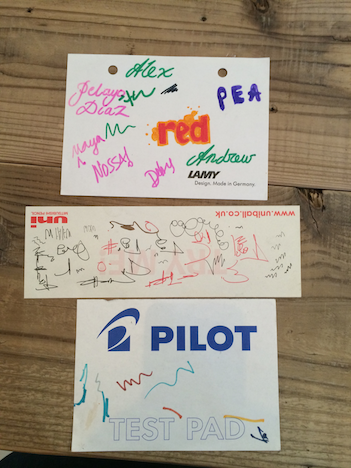 Part of the test writings collected as media from stationary shop

Test writing for checking the color or thickness of the pens at the stationary shop are usually not for shown to somebody but thrown away. What is the attractive point for your about such lines?

I can see varied drama in the lines of test writings. Because people don’t think those are not shown in public, they are relaxed and bold. Writings are sometimes sensitive and artistic and even it isn’t a letter. Someone writes lines avoiding others’ writing. Other one writes over the old writing vigorously without caring anything. Lines between writing and drawing are mainly seen and I can find the trace of trivial unconsciousness which I can’t see anywhere. You may see hesitant bleeding in the end of the bold writing or chaos of contaminated lines.

Drawings are overlapped with movement of people in the city, especially in the clouded station and terminal. Blank area created by deviation of the line is also like an air pocket where we suddenly encounter in the city. Motives which make me feel the traces and presentiment of movement of city and people are the source of inspiration. 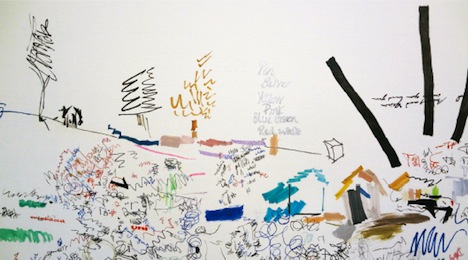 Yes, it’s different. Circles and straight lines looks similar, but if you get closer, you will see character of the country and color of the city there. People in London feel free to write vivid lines with many colors, however, Japanese seems caring about the quantity of the ink and don’t use pens for sale.

Because languages are different, the letters are different. I could see variation: from Chinese character to Kana, Hiragana in Japan. Test writing of brush pen is very dynamic. Illustration and drawing are also many in Japan. I found a secret message telling that she likes somebody. I was surprised that pun and Senryu were found too. 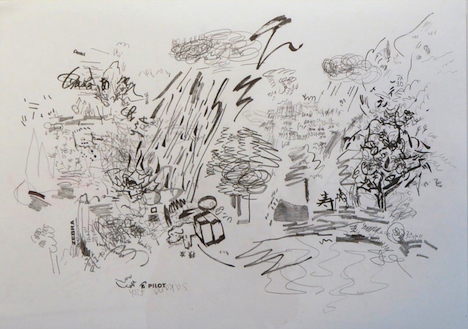 We can see lively drawings of rain, strong sunshine, tree, house, bicycle, etc… with various lines by marker pen and ball pen. How do you finish your drawing?

This series is made only with transferred or copied lines drawn by “somebody”. Lines are not related with my intention but I needed to think much about which lines I use and where I put those. I spread test writing memos of each city first and see what I can see from those.

Image of the city is broaden. Then I put some shapes or lines inspired by the image on the white paper or canvas. The drawings increase and I find that it looks like a part of tree. I look for other parts of the tree from test writing memos and puzzle them.

Test writing memo pulls out my imagination. It’s collaboration of somebody unknown and me. Forcible, unapproved and compulsory collaboration (laugh). 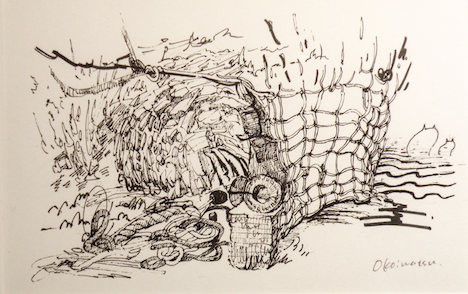 I can tell you have skill of realistic drawing of landscape from your sketch of Reibun Island. Why do you use others’ test writings but not your own lines?

I’ve been interested in lines since I was a student. I was looking for lines written between in conscious and unconscious. When I was into the construction site in London, I was attracted by lines and signs which probably showed reference or points for the operation appeared on the plywood board and wall.

Once I also paid attention for the graffiti on the house wall and under railway viaduct, but I wanted to find line much closer to unconscious. And I started collecting test writings. If I draw lines unconsciously by my self, I have to lose my seances, so I naturally started looking for others’.

It’s difficult to explain why I prefer things close to unconscious, but it’s probably I guess there is reality between others or I “don’t intent” and “don’t know”. When I look my back on the photo or hear my voice on the tape, I feel wired and shocked the reality. It’s like that.