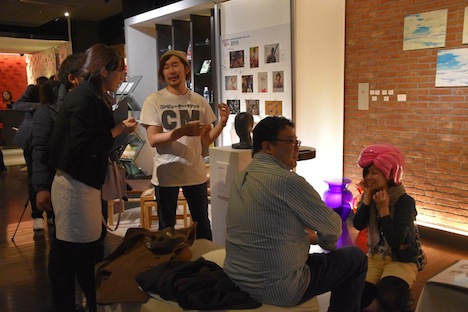 As a new shape of media art, a camera style device to connect users and comedians remotely called “Wearable Comedians” was displayed in the lobby. Once a user puts the device on his/her head, through the use of a small camera, microphone and earphone, comedians were connected to the visitor and would entertain with real time chatting. The professional comedian organization Yoshimoto Creative Agency, together with spicebox, developed this great experience to provide a lively vibe to Japanese society. Exclusive to the first day, demonstration and tryouts were organized. This both surprised and made participants laugh. 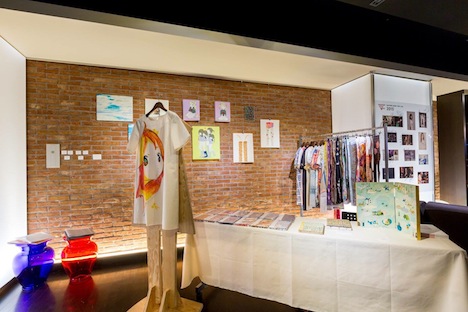 There were also two pop-up stores opened up in the lobby for a limited time.“Dress and Tights”is a brand where designers and artists collaborate together to make dresses and stockings. To go with their merchandise, original pop paintings from Ai ☆ Madonna were displayed on the wall. Also, they featured art books selected by Seigensha Art Publishing which were prominently displayed next to the front desk. The booth was popular along with merchandise booths with postcards and related goods of artists who were participating in the event. 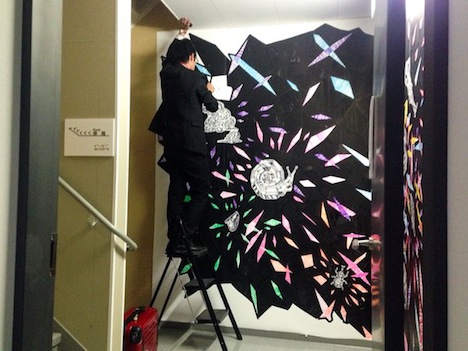 In the stairway which connected the 13th and 14th floors there was a main exhibit area called “Takuya Yonezawa Live Painting” which was held for two days. Yonezawa painted an exhibit called “Fake Exhibit Gallery” in the previous year in the same room, however, he had been wondering “why a landing between stairs is a landing?” and created a dance hall in the area with paintings of various motifs’ disco balls while he did his best to entertain visitors. At the end, he brought a real disco ball and used it to shine light on his painting. At the point when his painting was lit up, “snails” and “underwear” which had been painted on the wall appeared as if they were shining with their own light. 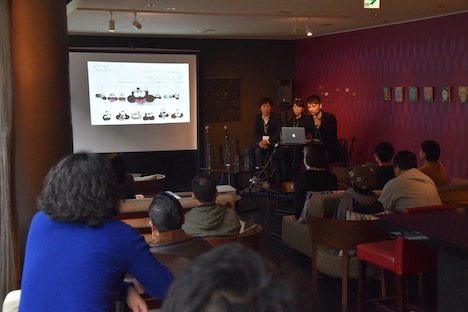 On the 22nd at the meet lounge on the second floor, Kentaro Totsuka from hpgrp Gallery Tokyo/New York, who manages the “Aosando Art Fair” and the “New City Art Fair” and holds an advisor position at Art Fair Sapporo, organized a talk event “How to enjoy art fair” with Miyabi Kaneda from galley Ten, which participates in many international and domestic art fairs, and Ryotaro Ishigami from Yod gallery. They gave a lecture about the difference between rental galleries and commercial galleries. All of the seats were filled up, and audiences seemed to be having fun by looking for their favorite works at the venue.