For the past five years, Downtown Los Angeles has been undergoing a significant transformation. This transformation is evident in the increased traffic, new restaurants, bars, and clubs, as well as the many new modern high-rise buildings dotting the landscape. This “renaissance” of downtown Los Angeles had added a palpable energy and new aesthetic to what was once a relatively bleak cultural landscape. This is no more evident than in the new Broad museum. 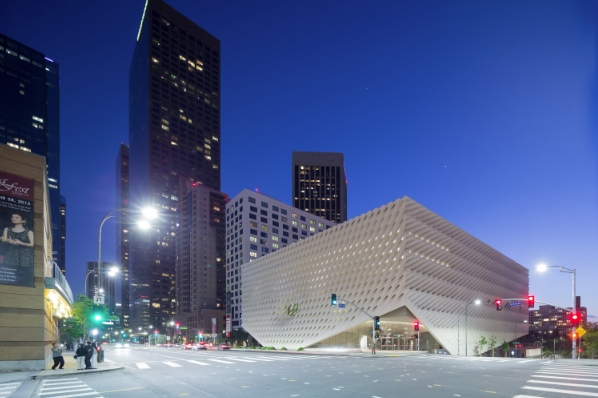 Founded by philanthropists Eli and Edythe Broad, the Broad Museum opened its doors to the public on September 20, 2015. It sits on Grand Avenue in the heart of Los Angeles with the Museum of Contemporary Art (MOCA) and Walt Disney Concert Hall as prominent neighbors. The building was designed by the architectural firm Diller Scofidio + Renfro in collaboration with Gensler. The Broad has a “porous” honeycomb-like exterior skin that distinguishes it from the nearby somewhat garish, metallic waves of the Gehry-designed Walt Disney Hall. The 120,000-square-foot, $140-million building houses 2,000 works of art in the Broad collection. 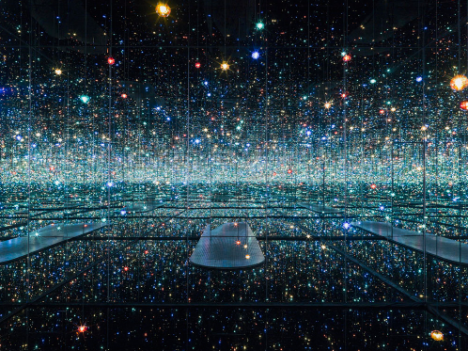 It’s interior consists of three floors. The first floor houses the museum gift shop, main entrances, lobby, and considerable space devoted to rotating exhibits. The work on the first floor is by far the most dynamic in the museum. Yayoi Kusama’s Infinity Mirrored Room – The Souls of Millions of Light Years Away, is a mirror-lined installation housing what seems to be an endless array of LED lights that at times pulse, flash, and illuminate the room. Only one or two people are allowed into the room at one time for a limited amount of time, just under one minute. The installation is truly dazzling and hopefully as time passes, visitors will be able to view the exhibit for longer period in order to truly contemplate the concept of infinitude. Additionally, it should be noted that visitors are required to get a free, but separate timed-ticket for this exhibition after entering the museum. Like the general admission to the museum, these tickets go quickly so visitors are encouraged to pick one up soon after they enter. 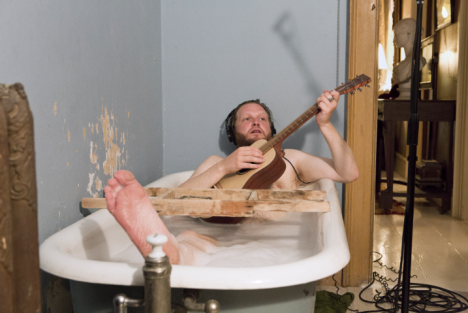 Equally stunning works on the first floor are Ragnar Kjartansson’s nine-channel video projection installation and the grand work of Takashi Murakami. Kjartansson projects video of various musicians on nine separate screens around a poly-sided room. In the making of his work, Kjartansson placed musicians in separate rooms throughout a mansion. All of the musicians are following the same abstractly constructed composition, but unlike normal ensemble performances in which musician play in the same space and work off of a shared score aided by non-verbal cues to one another, these musicians must respond and interact with each other aurally via headphones. Kjartansson’s installation recreates the separation experienced by the musicians as they performed in the mansion by isolating each musician to a single screen with the corresponding instrument’s sounds projected behind the screen. This gives the visitors the ability to hear a certain instrument above the others depending where they stand in the installation. The resulting experience evokes feelings of isolation, but also the opportunity to marvel at music’s ability to connect peoples who are otherwise experiencing separation from others. 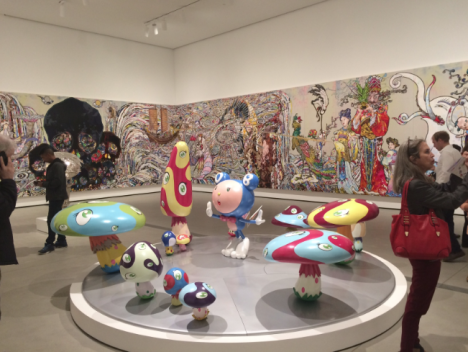 Murakami’s work, In the Land of the Dead, Stepping on the Tail of a Rainbow, is stunning in its scale and concept. A seemingly endless work that spans two massive walls, Murakami’s piece overwhelms at both a micro and macro level with its attention to small detailed, ornate patterns and sweeping large-scale mythical imagery. The homage to folk-imagery and narratives blends with Murakami’s unique compositional approach giving the viewer an abundance of imagery to contemplate and enjoy.