Same old same old, or is it?

Art buzz was thick in the London air this year as early as Ai Wei Wei opened his first retrospective at the Royal Academy of Art – triumphantly (one might add).

The UK official’s initial rejection to this Chinese human rights warrior his entrance visa was not only scandalous, but a very foolish hiccup – unlike the Chinese government, who confiscated Ai’s passport for no apparent reason. In the courtyard of Royal Academy, erected were Ai’s tree series; this enchanted forest of bare dead tree became the perfect prelude to what about to engulf this city – into the frenzy world of contemporary art and commerce.

Overwhelming excitement was duly obliged with ever glamorous V.I.P. previews, screenings, receptions and openings that followed. 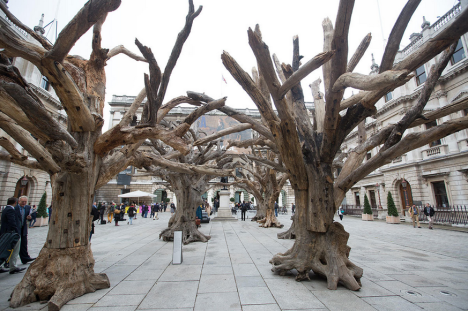 One of the most anticipated was Gagosian’s “Big” opening in Mayfair, a stone throw from Claridge‘s (one of the most media and fashion savvy luxury hotel in Mayfair) solidifying the term: Claridge’s Circle.

Larry G. has done it again, in tune with this über posh neighbourhood, his newest offering on Grosvenor Hill was somewhat demure, albeit massive, complete with intricate dark wood floorings. (“can this floor handle Richard Serra? his cor-ten steel sculptures?” “No” was the answer) Inaugural exhibition was of late Cy Twombly, his coral red drips still very vivid, the unseen Bacchus series (2006-2008) was definitely the highlight of the show, simply amazing.

London is never short of name dropping, ever; big names, legends, iconic and the cult following were all popping up everywhere, to name a few; Jimmie Durham at Serpentine (chance to see La pour suite de bonheur (2002) starring young Anri Sala, a legend), William Kentridge at Marian Goodman, Kara Walker at Victoria Miro, Bill Viola at Blain/Southern (Blain/Southern also staged a sound installation of Viola’s early, rarely exhibited work, his composition The Talking Drum (1979) at the underground car park in Soho). Pulling out the big guns, they say, no kidding. 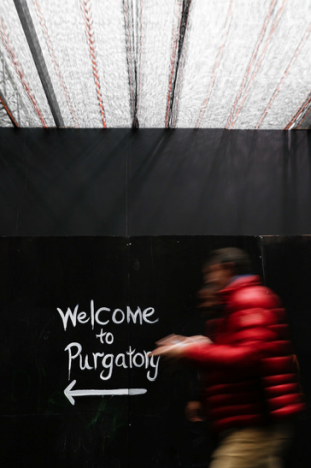 Now, on to the show. In it’s 13th year, Frieze 2015 started with a slogan “Welcome to Purgatory” graffitied across the jet-black entrance hall, this is a work of Lutz Bacher as a part of Frieze Projects curated by Nichola Lees. This somewhat reminded you of the bittersweet excitement of going to a night club as a teenager, a good start. Once inside, the familiar scene unveiled.