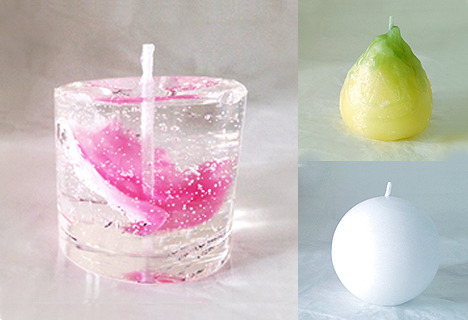 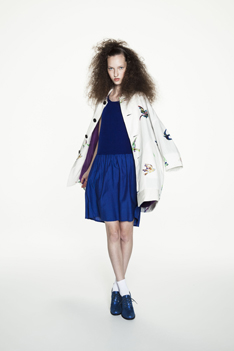 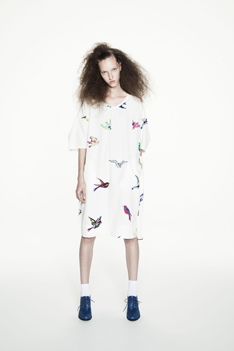 KAMISHIMA CHINAMI/YELLOW “S/S 2015 Collection”
From the S/S 2015 Collection of KAMISHIMA CHINAMI/YELLOW catches our eyes, MUSEUM STORE highly recommends “Bird’s Love” printed flying birds, with using smooth Tencel, cotton and hemp. In the lining of coat which images the Vietnam of birdcage, an impressive round form, colorful color scheme is used, such as the Asian goods. Arrived coat, pants and one-piece dress. By this one, Spring becomes more light. Colors: white, red and dark navy blue. 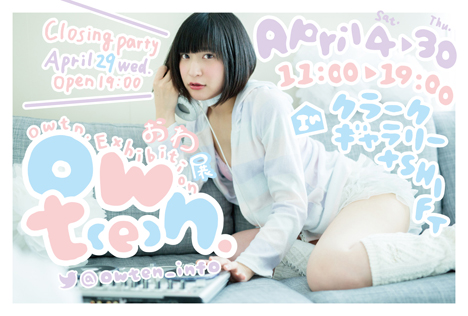 OWTN. “OWT(E)N. CLOSING EVENT”
Good news from “owt(e)n.” of owtn. holding at Clark Gallery + SHIFT till April 30th. FM Nemuro streaming “owtn.’s Crystal Growth” will record radio program in public from 13:00 to 14:00 on April 29th, with inviting Shinichi Ishikawa, an editor in chief of NUMERO DUEX (admission free). And on the same day, owt(e)n.’s closing party and live performance from 19:00, Admission: 500 yen (with one drink/owtic sweets).
In addition, the national distribution of “owticmode” will be released on June 17th, as the first shot from MUSEUM LABEL.

KEIKO ORIKASA “SPRING ISSUE”
For Keiko Orikasa’s candle series which ordered successive from various area in Japan on the online store of MUSEUM STORE, the newest “Spring Issue” will be launched. One of the new candle, like folding the color of spring in Hokkaido carefully, has a motif as a thaw: melting snow. Please find and imagine “what is coming after the thaw” in Hokkaido’s Spring, with putting a light. Spring Issue: Sakura / Yukidoke (Thaw) / Yayoi (March), Launched on April 17th, Price: 2,000 yen (excluding tax).

PARKGOLF “Par”
A long-awaited first album “Par” of PARKGOLF has released at last, who is a track maker based in Sapporo collecting evaluation from home and abroad. “Kiss Me” which was pre-released for iTunes won 1st place of the electronic chart despite reservation stage only. The artwork was created by PATANICA designed poster of the Rising Sun Rock Festival in 2015. As special favor, now you could get with “download card: DL card” of remixed sound source by luxury artists such as QRION. Price: 2,400 yen (excluding tax), all 15 tracks included, Coming soon.

NAOYA FUJITA “CONVARSATION BOOK: THE RUIN IF CULTURE”
A conversation book “The Ruin of Culture“, by Kiyoshi Kasai as a Charisma of SF world and Naoya Fujita as a new literary critic, will be published on April 20th. As they expand the unprecedented exciting subculture theory such as a thorough talk to Ronkyu the phenomenon of contemporary Japanese culture, Fujita also says “it’s a wonderful effort”. The intellectual excitement of continuous debate over the three days will come soon. Price: 1,800 yen (excluding tax), Coming soon.