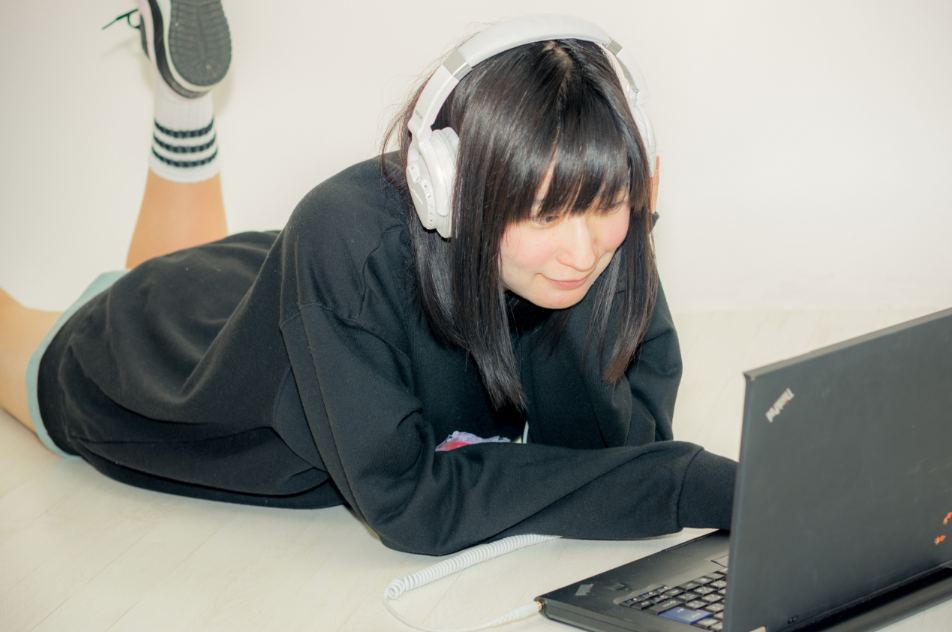 A world-first poemcore idol, “owtn.“, is the leading person of girl Poemcore, taken notice by foreign countries. Even though she just debuted last summer from Internet poem core lebel “POEMCORE TOKYO“, her presence, sound, and sense of reading are worth listening. This time, she answered various questions interesting readers, like “what is poemcore?” or “music × modern poetry?” 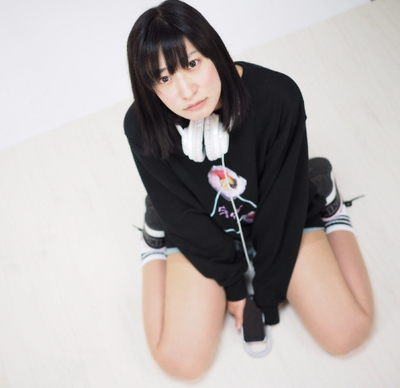 Please tell us about the origin of your name, owtn.?

I got a nickname, “Owatan” when I worked at a part-time job of idol cafe before. It was derived from “Jinsei Owata”, an emoticon on the Internet meaning “my life ended”. So, when I started to work as a poemcore idol, I added a symbolized image and Internet cultural image to “Owatan”, and then “owtn.” was made, Actually, I didn’t think about the name so seriously, so It’s surprising that the name has come to stay,

I see, the origin is so understandable for me. Poemcore is, a genre spread among male on social networks from 2009, reciting original poetry with music. What is a beginning for you to take an interest in poemcore?

Originally, I had written poetry, maybe since I was in elementary school, or very very young. In the summer of 2013, I’ve met poemcore. This is after I made “Let me be with you” (now renamed to “Jerryfish”), recorded this time. That’s why I realized that what I do is so close to this style of poemcore.

I heard there are three keywords of poemcore including 1)self-consciousness like a knife, 2)darkness, and 3)lecherous mind. Do you always write poems while thinking about them?

I don’t care specially. I think the act itself that “I write what I want to write” is the keywords, and also poemcore, rather than contents of my works. So, my mind hasn’t change before and after I knew them, I think just doing poemcore already satisfies the three keywords, for other poemcore artists as well.

Please tell us an outlook on the world of owtn. poetry.

The world outlook, ……. umm, probably many think that themes of my poems are mainly romantic love, but it’s not always true. I write suggestively even hanging out with friends, movie, music, or my mind when I see amazing works and scenery. (laugh) I have no experience of situations written on my poems, and almost all of them are my imagination. But, I’m strongly conscious to write poems realistically, like “how do I feel in this situation? how about my emotion, a touch, and temperature?”

By the way, when do you compose them?

On the train, and after eating lunch! (laugh) Concentrating all my energy to write poems is not my style. Because phrases fragmentarily come to my mind, I note them on my iPhone and finally make one world by connecting chosen phrases from them. 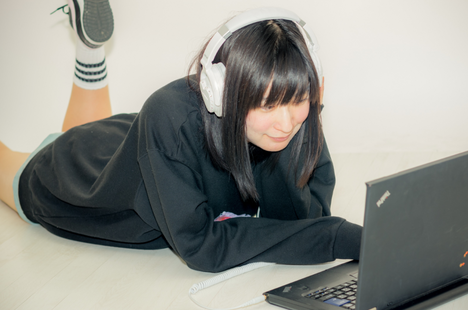 So far, I feel you’re an ordinary girl. How’s your private life?

I spend days like a ordinary girl, to go shopping and eat out with my favorite friends. Really ordinary. Oh, but anyway, recently I’m so interested in cup and ball. There’s cup and ball in a living room of my house, I don’t know why, and then I tried to play it. I was surprised that I was better at it than I thought! (laugh) I found many techniques. One of them is called “a butterfly-dance”, like Chu-ni-byo(Japanese words: the self-conscience stage of puberty). I want to complete it now. Also, I watch only old TV commercials of 1990s and memorize the symbol of elements (especially, after no.111 of Roentgenium), I do those maniac things at a pin point,

Do you have any other things you’re interested in?

I want to know and try what I don’t know and I can’t do now. I believe my experiences enhance the world of my poetry. Also, I want to speak English because I receive offers of collaboration and comments from abroad. I’ve worked as a visual icon of a record label “Future Disorder Recording” since this May, and I always talk to a label owner, Camilo, in English, but I know it’s broken. So, I hope to speak English correctly,

Poemcore itself is mainly released from Internet labels because it is a genre spread on social networks. What is an attractive feature of poemcore?

The attractive feature of poemcore is a harmony of literature and music. Originally, I have written tons of poems on my blog for a long time because I had dreamed to publish a book of my poems in the future. But my poems have been spread in an instant by mixing with a track. People take an interest in poetry because of a collaboration with music. I think this is an amazing cycle. it’s also attractive for both suppliers and receivers that it’s easy to get and fast to spread because poemcore is influenced a lot by Internet culture.

In these attractive features, is there the reason why you chose poemcore as your expressive way?

I’ve chosen poemcore before I realized rather than I’ve chosen it intentionally. Like, just reciting poems as being recommended, and finally realized I’m doing poemcore… 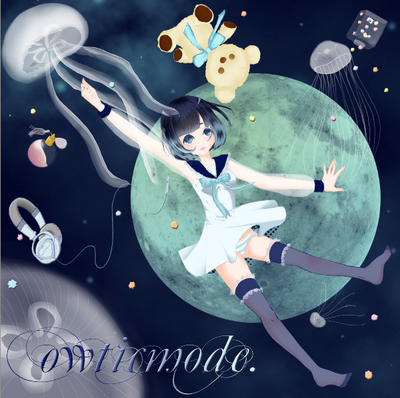 How process did you take to make this album “owticmode.” with Mr. Munenoli?

When I reciting poetry at event in May 2013, Mr. Munenoli visited there accidentally. After the event, he sent a massage that “let me compose a track for you” on Twitter. With this opportunity as a starter, we have knew each other, and started to work together. Also, he is a person who told me about poemcore. Then, I met “POEMCORE TOKYO“, and a label owner “BOOL” offered to release an album. When I told the offer to Mr. Munenoli, he approved of it passionately, and we completed it in three months. I think he was so hard at that time. I’m sorry about that, I always ask unreasonable things to him. (laugh)

It seems like there are some secret stories of production.

Yes, many…… At first, I didn’t like to listen my voice. I didn’t listen almost all of my completed works because it’s embarrassing to listen. (laugh) But, after I made a fourth song “RE:meillish“, what I want to do was getting clearer and clearer. And, I become so greedy for my production like thinking enthusiastically my way to recite poems. The jacket was created by my DJ friend, KillMiku of “Kodomo Club”. Floating things such as a bottle of perfume, a teddy bear, and a headphone are mine in my room. What I focused on most is showing underwear. I discussed with KillMiku while seeing catalogs of underwear. (laugh)

Finally, please tell us your future goal, plans or activities.

On this new year day, I wished to have an event in Tokyo. Then, this wish already came true on March. So, now I’m on upward revision. I want to participate in an event of Tokyo in the later half of the year! My goal in the long run is to be an icon of poemcore. I long like “poemcore is owtn.!” In any case, I want to be a person who spread “poetry” with a new view. 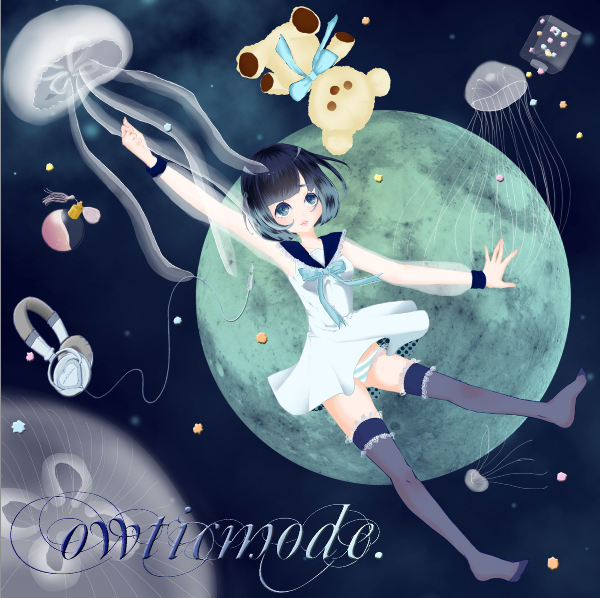