Berlin has many galleries and museums with beautiful exhibit areas. The old and new museums on the Museum Island, chosen as World Heritage Sites, are a good example. On the other hand, though its scale is much smaller, we should not forget the private space, Schinkel Pavillon. While it is in the middle of Berlin, where famous architecture is plentiful, Schinkel Pavillon stands out prominently and shows contemporary art inside of its beautiful space. 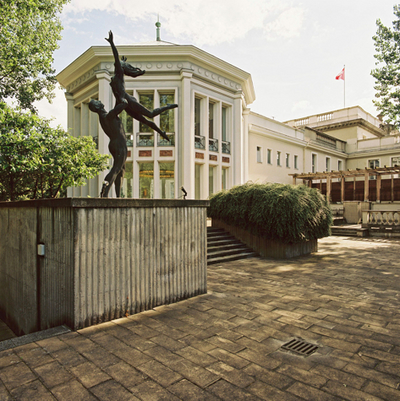 For a long time Unter den Linden, a major street in the heart of Berlin, has connected the Museum Island, where the Berliner Stadtschloss used to be, and the Brandenburg Gate. The buildings on the street give a present-day glimpse in to the old appearance of the town, such as the German History Museum which used to be a weapons’ storage facility, Neue Wache which was once a guard station, the Humboldt University of Berlin and the Berlin Library. Off a short side street the Schinkel Pavillon appears. There is nothing particularly unique about the outside of the building, however, once people enter the exhibition hall they will be amazed because of not only the art pieces, but also through the scenery of Berlin coming into their eyes. All sides of the octagonal room, sans the entrance, are made up of glass windows so that the sunlight and an outside view can welcome visitors. Although the exhibit room is a small space, Berlin’s scenery seen through the window gives the room a large appearance. 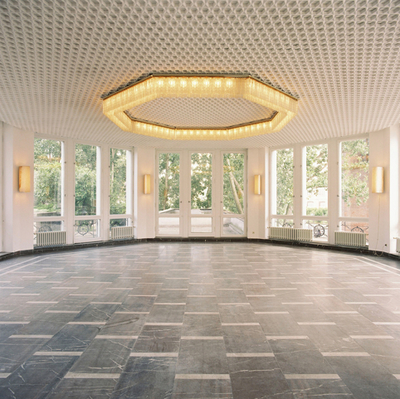 The name of Schinkel Pavillon came from the 19th century German architect, Karl Friedrich Schinkel. He was serving the royal family at the time and took care of the city planning for the middle of Berlin. He created many solemn buildings influenced by Greek architecture, such as Neue Wache and the old museums. Schinkel Pavillon’s building was actually built by Richard Paurick in 1969. However, Richard included the ruins of Schinkel’s architecture in his design in order to give the building a historical look. Also, the church next door had been designed by Schinkel, and its huge appearance through the glass windows makes a strong connection between the building, Schinkel, and the sights in Berlin which he created. 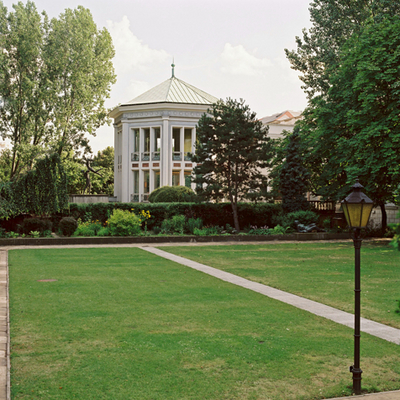 In 2007, artist Nina Pohl started organizing contemporary art exhibits at Schinkel Pavillon. She is in charge of managing the space and curating art shows. Since this space is not focused on earning money by selling art or taking admission fees, their funds are raised by a Kunstverein system, wherein the public can become members of Schinkel Pavillon and pay an annual fee to support the organization. Therefore, unlike galleries with commercial art exhibits and museums which must have popular exhibits to increase the numbers of paid visitors, Schinkel Pavillon provides very high quality exhibits. 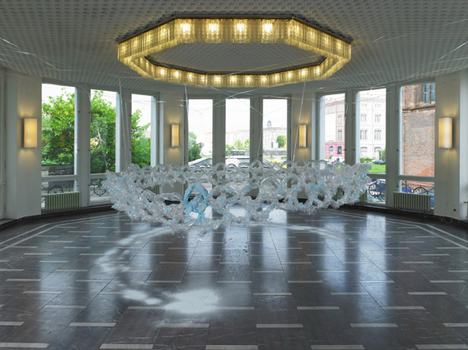 Artists who have done shows at Shinkel Pavillon include John Bock, Christian Jankowski and Isa Genzken, all internationally active artists. Many artists have shown installation and sculpture pieces that utilize the space, since exhibits are held in the small glass-walled room. One fine example is Scottish artist, Karla Black, who positioned a huge, fragile-looking cellophane ring in the middle of the exhibit space. This piece was designed to to be complemented by the ceiling light, and emphasized the beauty of fragilities and shapelessness when contrasted against a space in the pursuit of perfection. She brought change to this perfect space and succeeded in creating art that resonated in the space. 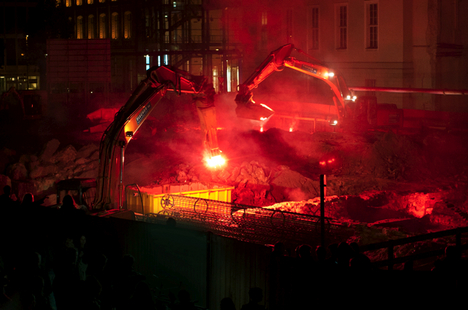 Performance in conjunction with the exhibition, ‘What it Does to Your City’, Schinkel Pavillon, Berlin, 09/13 – 10/21/2012. Photo: Linus Dessecker. © Cyprien Gaillard, Courtesy Sprüth Magers Berlin London

The current exhibit of Cyprien Gaillard, held from September through November of 2012 involved the town of Berlin. The artist used the processes of destruction and the shape of civilization as themes, and chose the concept of ‘the future museum’ for the exhibit by displaying the claws of excavator shovels, like those used at construction sites. These are a relic from the present which might eventually be displayed at a museum, and would be a hint to the future as to our present-day life style. Also, through the exhibit hall’s window, a construction site could be seen in the the shovel’s background, helping attendees realize the continuous changes occurring in town. The most impressive part was the performance held at the exhibit’s opening, which involved having a few excavators move under the sunset along with the music. The excavators represented the destruction and rebirth which happens in this town under the light of smoky candles. There, people realized that the thing the artist wanted to show was not only the view from the exhibition hall and/or pieces of art, but also the town of Berlin itself. At the same time, the audience understood strongly that exhibitions at Schinkel Pavillon can’t be separated from Berlin. 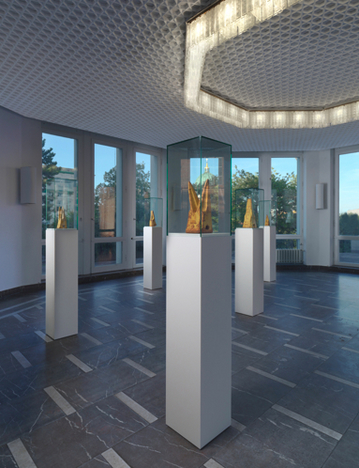 Everyone who has visited Schinkel Pavillon must have notice that the attraction of the exhibit space is the birth place of the connection with Berlin. From the exhibit hall’s windows observers can see Berlin’s TV tower, which used to be a symbol of East Germany, and the reconstruction site of the Berliner Stadtschloss, which was removed while part of East Germany. The construction sites where old buildings collapse and are rebuilt as new modern buildings can also be seen. After all, one can fully view places where past and present are mixed. Such overwhelming space attracts artists, though it also conflicts them. Sometimes, exhibit spaces could be too beautiful to conceal advantages of pieces. Therefore, artists develop conflicts with the town of Berlin and/or architecture spaces which is called resonance.