Have you heard of “Old Folk Craft Shop Sakata?” Since the shop opened its doors 40 years ago, it has remained a little-known antique shop for those in the know. It has been catering to an impressive cliental–from the writer Masako Shirasu to artist Takashi Murakami. The “Old Folk Craft: The Way Ahead – Kazumi Sakata’s 40 Years” exhibit held at the Shoto Museum of Art in Shibuya, Tokyo was an ambitious attempt to introduce some 115 items from all periods and cultures with which the shop owner, Kazumi Sakata, has dealt, both directly and indirectly. 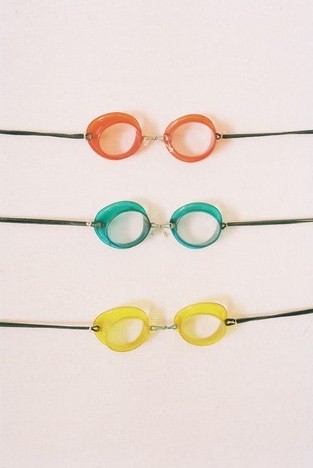 With such an introduction, readers may wonder what kind of valuable and precious antiques are displayed at the exhibit. Those who visit the museum with such expectations would, to his or her chagrin, find no such items of great monetary value. What the museum showed instead was a range of items from those that evoke changes that occurred over time, including rusted knives with nicked edges that have become obsolete as cutlery, wrapping paper from a pawn shop dating back to the Edo Period so old that it seems like it would crumble and disappear if one lays a finger on it, a cracked white glaze Delftware plate that is held together with kintsugi (golden joinery), an aluminum bento box that acquired a distinct sheen over the years, to relatively contemporary industrial items like a calculator by the German electronics maker Braun, wristwatches by Swiss watchmakers SWATCH and MANDAINE, and pop-colored retro swimming goggles from the Showa Period. These items that appear to be a jumble of disparate artifacts are brought together by shopowner Sakata’s discerning eye.
When he was a small boy, the things Sakata liked were very different from those his friends liked, and he even worried that there was something wrong with himself *1. After graduating from university and working for a trading company for a while, he opened his antique shop in Mejiro in 1973. On the opening day of his shop, he sold a folding chair that he picked up on the street. This episode reveals how different Sakata’s preferred items are compared to what the word “antique” usually connotes. 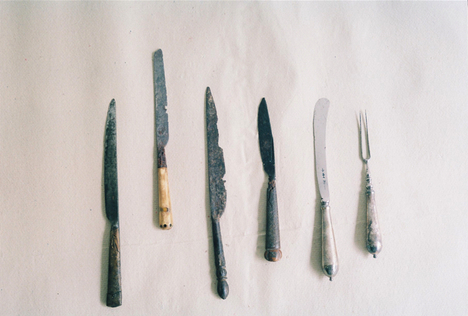 “Unfortunately, but inevitably, the beauty of an object reveals itself only within the scope of the viewer’s sensitivity. That means that unless that person is mature and independent, he will just rely on others’ criteria for appreciating art or on the labels attached to the works in judging their beauty. In this exhibition, the objects on display lack detailed captions. That is, of course, due to my laziness and negligence, but it also stems from my hope that each person will engage in a dialogue with these objects based on his or her own values and standards.” *2

“My hope that each person will engage in a dialogue with these objects based on his or her own values and standards” says Sakata, whose avant-garde approach has received much attention from all fields through a series of essays he contributed to Geijutsu Shincho magazine from 1999 to 2003 titled “Hitoriyogari no monosashi (A yardstick of one’s own)”. In this series, Sakata would choose one item from his collection, and write about his first encounter with the item and the appeal it holds. He avoided making generalities, and wrote about each item’s own story, with both sincerity and humor. Without pandering to existing standards of values and always looking to innovate, he ranks among those historical connoisseurs such as Sen no Rikyu, Yanagi Soetsu, Jiro Aoyama, and Masako Shirasu. In 1994, he established “museum as it is” in the Chosei District of Chiba Prefecture, expanding his range of unique activities. 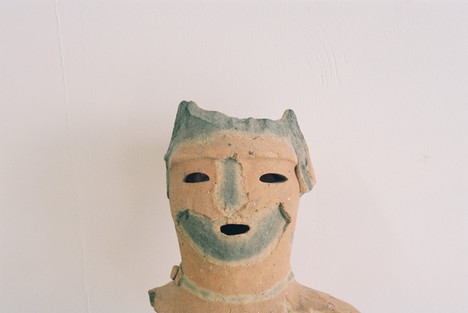 This exhibit at the Shoto Museum of Art is split into the first exhibition area in the basement and the second area on the second floor. The first exhibition space, with its high ceilings, displays large pieces like wooden doors by Mali’s Dogon people and fabric from Nazca, Peru, without losing the distinct aura of each item. The comparatively smaller space on the second floor exhibits such items as tableware, washcloths, and calculators—things found in daily life, displayed so that each item can be observed in proximity, appropriate for each item. 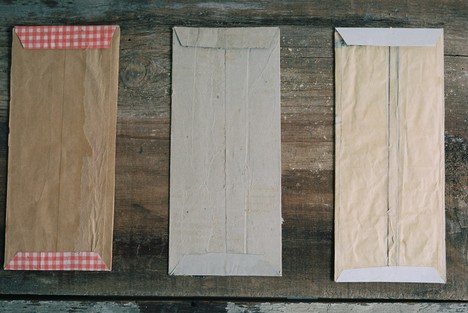 An exhibition that brings together such a variety of items is rare. These items, which can only be grouped together by their commonality of being chosen by one individual named Kazumi Sakata, who spent decades developing his discerning eye, or his “yardstick”, may only appear to be useless knickknacks to people who do not get them. However, as I quoted Sakata earlier, standards that separate junk from jewels are arbitrary. For someone without interest in the genre, even high-minded contemporary art is dismissed as “incomprehensible” (Duchamp’s “Fountain” is a prime example). Anonymous yardsticks, like market value, are also constantly fluctuating. One could argue that such shortsighted speculations are the appeal of the art world (and not only in the art world), so the weapon/yardstick with which we are armed becomes increasingly important.

Wandering through the exhibit with these thoughts in mind, what struck me the most were handmade envelopes titled “Grandfather’s Envelopes.” *3 Dozens of the envelopes of the same standards, made by paper that could be lying around anywhere, such as prescription envelopes, calendars, or one’s medical checkup report, are displayed on a wall. An important index when discussing a specific item is the materials used and the necessity in using those materials. Standing before these envelopes, I started to wonder if it was just fine and strong Japanese washi paper or high quality cotton paper that is necessary to make a “good” envelope. To carry out the mission of sending news to friends and family, the everyday materials used for these envelopes hold the most necessary elements. It is as if this piece is trying to convey that in order to determine the true value of an item from the concept of necessity, it is essential to be able to discern the possibilities an item holds. The items covered here, of course, are only a small introduction to an enormous exhibition collection. At times you will be blown away by the pure beauty of an object’s form, and at other times, you will stand before an object that defies our common sense (for example, an African currency the size of a person) and think about a different culture. Depending on each visitor’s own “filters,” objects chosen by Sakata will hold a different necessity for each person. 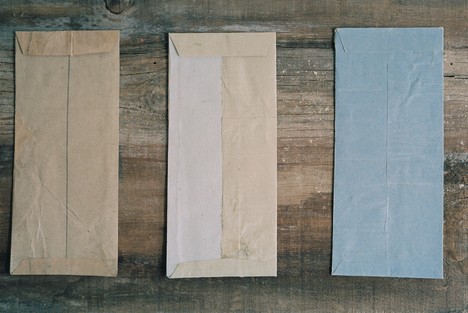 We live in an age in which the Internet is enough for simply collecting information or knowledge, yet people make the effort to go to museums. What drives us for that action, and what is it that we wish to find in these places? By tossing out superficial knowledge and assumptions, and through experiences where we face objects in an uninhibited and direct manner, we might find the clue to answer this question. If you have missed the Shoto Museum exhibit, I recommend you visit “Furudogu Sakata” in Mejiro, Tokyo or “museum as it is” in Chiba Prefecture.

*3 More on “Grandfather’s Envelopes” is available in a book published by Rutles (2006) with the same title (Ojiichan no futo).