One of the most renowned artists who plays an active role in either art or music.

When he was a boy, he was charmed by bats and he thought we can communicate with them. Now he has grown up and became an international artist inspired by his childhood belief. His name is Carsten Nicolai. He works in his hometown in Germany and his extraordinary talent is shown through the two different fields of visual art and music. His art has been established by weaving together these two fields. Let’s see if we can interpret it through the medium of an interview. 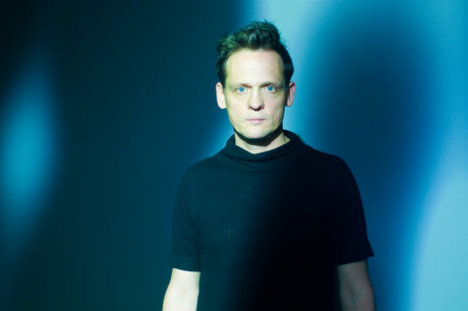 In 1965 in my town of origin, Karl-Marx-Stadt (now called New Chemnitz), in former East Germany I studied landscape architecture in the 1980s. After graduation I started to work as an architect of urban design, but since the 1990s I started to work as a freelance visual artist. Although I become an artist, and a musician, I did not study or go to any art school, this is because in the 1980s and 1990s there was a freer, open attitude, so we could choose to do what we wanted to do without a specific focus.

Please explain the artworks that you have created.

The exhibition of this work of light has been implicitly divided into two rooms. I call them “Reflex” and “Anti.” Anti takes place in a dim room; the object of this is to exhibit that which can’t be recognized clearly. Rather than show the concept of information directly it symbolizes what is hidden. Meanwhile, Reflex is placed in a bright space. You can recognize the outline of this object and you can confirm it immediately. 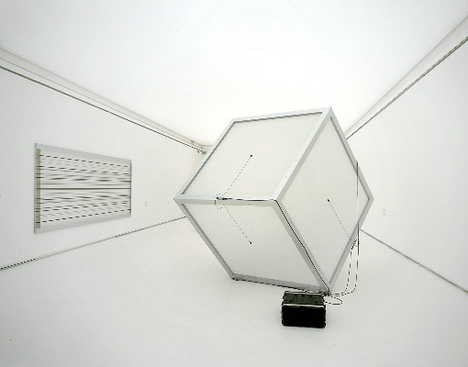 Reflex
Everything, including all those present, is reflected in this room, which has a high intensity of light. The audience comes into the room and they become able to recognize what is clearly reflected. 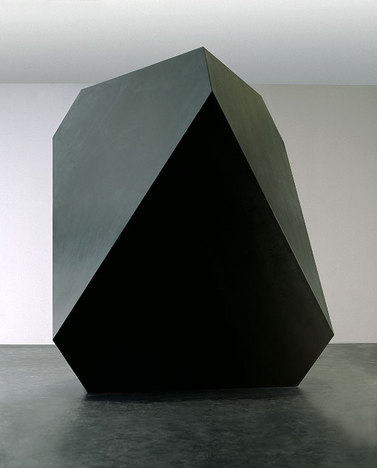 Anti
This work is a very black geometric object. It represents the attractive magnetic field produced by dark and low-frequency tones. 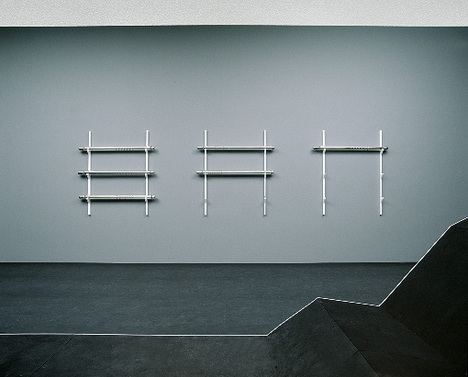 Void
This work has a glass tube filled with the flowing sound of a specific time of day. This work is intended to cast doubt on what you see.
“Is the sound really sealed into a glass tube?”
“Is the inside and outside of the glass tube in the same state?”
“Is it possible to stop time?”
It will trigger a variety of questions. I think philosophical questions and scientific questions are always in a phase of conflict. The relationship between nature and science, our own creative problems, questions about these kinds of things are kept in mind while I create a piece of work. I have an interest in “random” things. Various things happen at random around us but can people control such it? How do people grasp the random? Is it possible to be analysed scientifically? It has always been my theme. 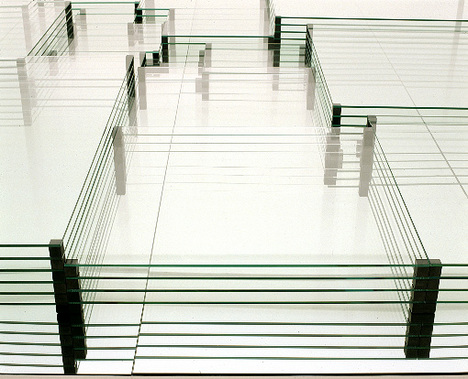 Perfect square
This is an object called the perfect square. It was made with 21 pieces of different square sizes which are needed in order to combine together and configure a single square. It is based on the law discovered by “AJW Rujin” who was a Russian mathematician in the late 1970s. I think that mathematics exists for the purpose of learning the principles of nature.

In this philosophy the ordered squares are accompanied by the symbol of human’s aesthetic sense. My motivation for creating this was because of an interest in natural science, and the people who have seen my work say that this is very scientific. However, my work is based on necessary science (though perhaps it isn’t the best system), maybe it can be called “order” so as to understand its nature.

I’ve been searching for the principles of nature through my creations. In this production I ran into the theme “How do humans perceive?” and “what is the depth of it?” During my work in the mid 1990’s, I became very interested in the area of the human being’s audible and inaudible sounds. I discovered new questions by repeating the testing of the audibility of sound beyond the audible range of humans.
“Why does sound really exist?” “Is sound what people hear or is it just their imagination?” It has led to the theme of my creation “Visualization of sound” 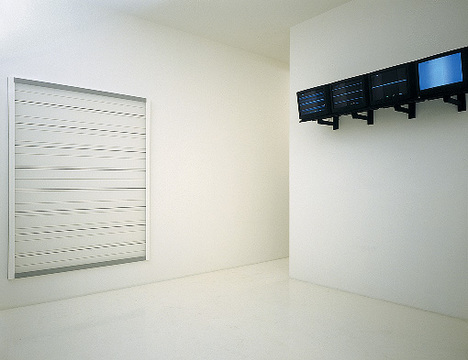 Telefunken
This work was made for the consideration of the relationship of sound and video with an oscilloscope. It is made of a very simple structure. By using the signal of the audio portion of a video signal input, parallel stripes that are synchronized to the sound are born. This work was the first experiment that was performed under the theme of “Visualization of sound.” This was an intentional mistake and the results were unexpected, but not by accident. Also on making music, the sound called “Glitch” which emanates from mistakes like this are quite an inspiration to me. I think that the visuals generated from sound sources will expand the possibilities of image display devices such as monitors and televisions. 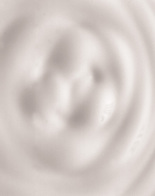 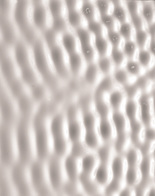 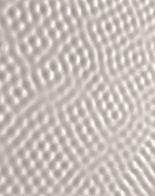 Milch
In this work the speaker is installed under a tray filled with milk and it emits a low frequency which is inaudible. However you can see the ripples of the milk. You will recognize the change of the ripple. In low frequencies it is waving chaotically but it turns into beautiful patterns when the frequencies become higher. 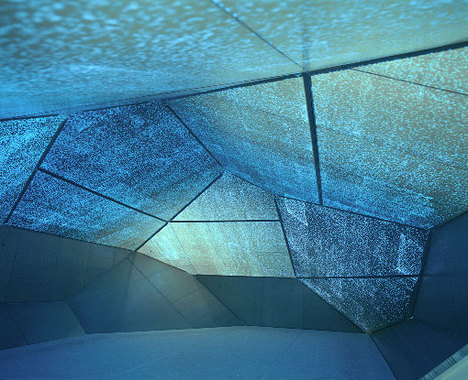 Syn chron
This work is a different form. I created it in Berlin. It took a long time, almost two years to build it, but I could include my themes of elements such as sound, light and space. There are geometric aspects like crystal as well. It looks like a pavilion of wind at first glance but you can see the outside and inside of this work at the same time because they are made of translucent material. It produces various aspects by the variation of light and sound.

Please tell us about your label “raster-noton“.

I launched the label in 1996. No one would release our music so we decided to do it ourselves. Since it was founded, the three of us, Olaf, Frank and myself who co-founded the label, have never wanted to release very ordinary music. When the label was released, we decided to design a comprehensive graphic package as well as the performances because we had a background in art. Even in the way we do our releases we have tried to design it to not only be cool, but also to explain what we want to express simply. Now it’s not novel but there were no CDs which were written like our cases at that time. However, now in the media there aren’t just CDs but also SD cards, LPs and books being released. Also on selling our work we opened the shop for just a limited time and we also performed to sell the works of raster-noton in many parts of the world. The shop is effective for people to actually come together. I believe it is very important that people meet each other and get information about something new.

In keeping with your career, what do you think about the difference between sound and music?

Sound is present in all things as a frequency. Music is considered to be part of sound’s frequency. For example, ultrasound is a thing that exists as a sound but no one can recognize it as a sound. However, it is unquestionably sound.

There is various types of music today, but I feel like it has become difficult to recognize the sounds that exist in the world. What do you think about this situation?

I think that current music has been commercialized too much. I think people will change and become more interested in innovative sounds if they have an interest in the depth of sound.

It can be said that the sounds that exist in this world are the property of humankind. Is there the possibility to use sound for means of expression?

I believe that sound exists infinitely and that it has endless possibilities. We exist and yet feel there is very little sound. I think they function to connect people to people as social tools and that they are very democratic. I do performances because I strongly believe that sound is a language without borders.

Visualization of sound has been done in various ways. Does it have any meaning for you?

I think that the aesthetic of sound has no visual elements. I’m very interested in visualizing sound which is difficult to perceive for people because its frequency is too low or high. In addition, in order to express this, performances are very useful as a way of conveying the impact of sound, using a visual medium is also very important to the performances.

I asked you about your activities so far, please tell us about your collaboration with Ryuichi Sakamoto. Was there any difference?

The collaboration with Mr Sakamoto was very exciting. The sound in my work is very technological and experimental, but his romantic sounds made by piano are very lyrical. This is very contrastive, but I think it is very interesting. I’ve continued working with him for nearly 10 years so far, I believe that this can be considered as a form of creative act, rather than mandatory, to complement the positive aspects of each other.

I would like to ask about the current status of Berlin. What you think about the relationship between art and cities?

It is for very compelling reasons that artists live in Berlin, although it is the capital city real estate is cheap. On the other hand culturally it is very active, for example, the club scene. However, this is due to the continued activity of many artists. To be honest, Berlin hasn’t succeeded commercially, but I believe the city of Berlin is the people who live there and there is a power to succeed. Certainly Berlin is the tip of current fashions, but this is not the reason why I live in Berlin. I live there because within this city co-exist two elements, one from the former East Germany and another from West Germany. Namely, many kinds of lifestyles can co-exist in this city. So to speak, I think that modern Berlin is not so German although it is in Germany.