Takehito Koganezawa had a performance at the Guggenheim Museum in Berlin on January 31st. He is a Japanese artist based in Berlin, who mainly creates visual works and recently published an art book of his drawings. He’s been in Berlin for four years where he works. 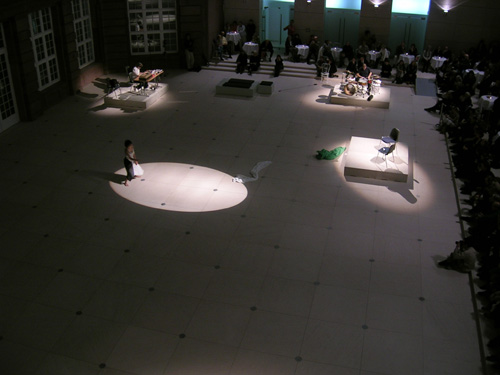 There is a time in Berlin when some museums are open until late on some weekends, and his performance was held during that time. The stage for this performance was the large space built in a well hole style just in front of the entrance. The space made us feel good visually and excited about what was about to happen. 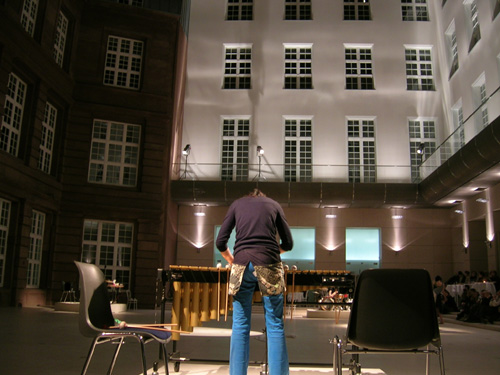 The performers were Roberto Lippok for electronics, who are known for their release from Raster Noton or one of the member of To Rococo Roto, Christof Kurzmann for clarinet/computer, Taiko Saitoh for vibraphone, Robin Hayward for tuba and Junko Wada for dance. Takehito performed as a director bringing a radio-cassette recorder. Apart from him, all performers were blindfolded in the attempt to purify their senses. It was exciting to see their performance only depending on their ears and tactile feeling without seeing anything.

The performance had already started but there was no sound even after a while, but it created a tense atmosphere during which we kept quiet. We had to concentrate on our ears same as the performers as if we use ears instead of eyes.

After a while, the silence was broken with some little sound and it made us feel a little relaxed. However, the slight sound melted into the space, which is 30 by 20 meter big and it so it was hard to recognize it. For me, the space itself looks like resonance equipment and the sound reached our feelings rather than large sound.