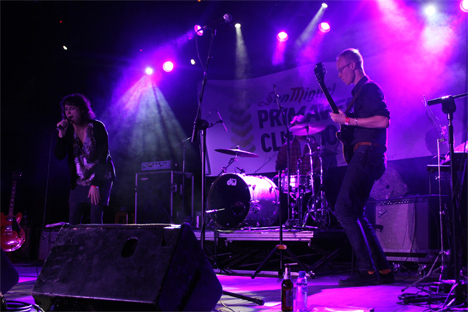 Just a week before the start of this year’s Primavera Club Festival I was doing some research about it and there are a bunch of blogs about music in the city.

I found it a bit awkward that the music blogs are not so much interested in music itself. I mean, we all know that The Primavera Club is the smaller and more experimental wing of the big Primavera Sound and all the bloggers are expecting the line-up to be similar to the summer version. In my opinion that would be just boring to bring the super hype artists again and all the bands that I don’t know if these bloggers really love or if they just like because those are the hypes bands from their musical bible Pitchfork Media.

I think talking about the music critic is a lazy favor to base your “likes” on just one big promotional website like Pitchfork (i think they are great though…). In Barcelona there are so many things going on in the local scene that I found just clever and justified to let this smaller version of Primavera take care of them.

For example, the local unique label Ozonokids that have been 10 years promoting, editing and organizing gigs for the local and international weirdo music experiments have got a showcase this year. Of course the artist they present at P.Club are not super sellers or even known to the audience, but Hey! its about music… you better go and listen.
I tell you this because on the blogs, the people were critic about the artists that the Festival selected. But I guess there is not much time for disappointment for this “music critics” because the festival responsible just announced a few of the artists that will participate in Primavera Sound 2011 Edition.

They just confirmed Pulp, Suicide, Comet Gain, Animal Collective and few others that have blown the people hearts away! So I guess the Primavera strikes back.

I just want to make this article to say that it’s great that a big festival supports the local scene and tries with experimental stuff. The Winter Edition is more focused on local audience because all the people who travel from all over europe to Primavera they rather come to the summer festival to enjoy not just the festival but the weather and the city. 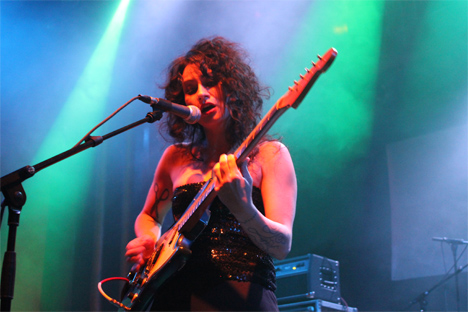 Then let’s go to the gigs! Wednesday started with two fantastic live shows. The first one at la(2) presenting the delicate dream pop from Wild Nothing and followed by a powerful live of Frankie Rose & The Outs, the all-girl band mixed garage, shoegaze with a little surf and rockabilly. The concert was so energetic that 40 minutes runs like 15. Fantastic! 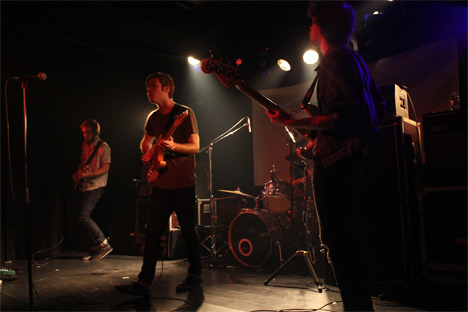 Second day and I’m making the plan of the journey and just realize that it’s impossible to cover all the shows I want because this time the Primavera Club is split up in several venues around the town and its impossible to be on time from one place to another. 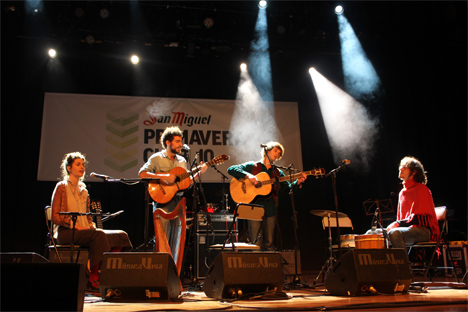 I went to the Casino L’Aliança del Poblenou where Josephine Foster presented a weird but tender alliance with The Victor Herrero Band. The unique voice of Josephine singing traditional songs from Andalucia. 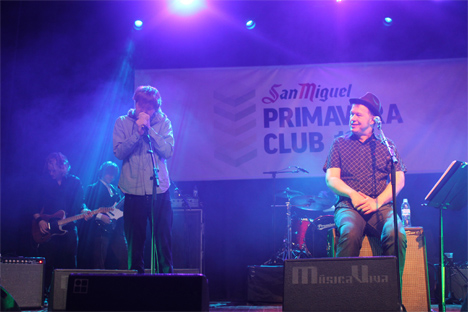 Edwin Collins with his son

Later the Casino was crowded to see the great Edwin Collins. The singer took with him some of Orange Juice repertoire joined by an incredible band and even his son joined him singing and dancing on stage. It was an emotive presentation with a huge ovation. Fantastic. 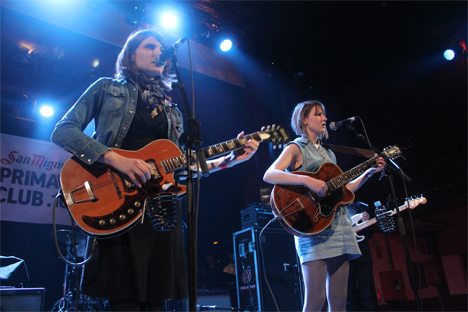 Jump to Apolo to see Smoke Fairies, I think that their name just revealed the kind of atmosphere they transmit with their music, a mixture of folk and vocal colors from the woods. 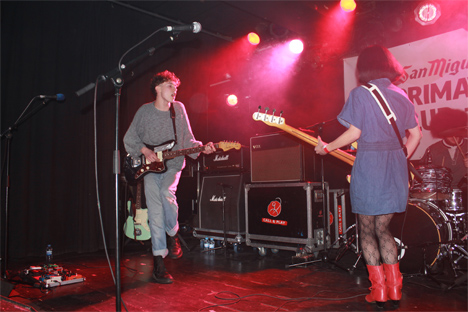 Then the jewels of the Festival just started to shine. The British young band Yuck at La(2) were one of the big surprises of the night. They came after being touring with big bands like Yo la Tengo and it seems that they will follow their steps to become a cult band. 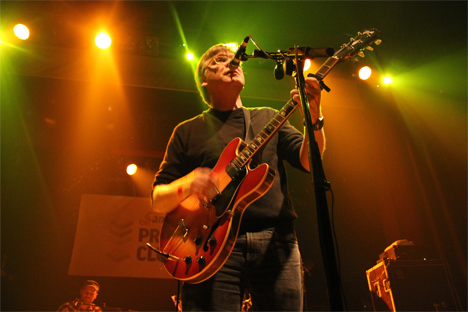 The movement started at the Apolo venue to present the veterans Teenage Fanclub, the band didn`t disappoint the huge amount of fans. They played a handful of hits and kept their status of big band intact. It was a day to discover a new generation of bands that will make the indie panorama really interesting the next years. 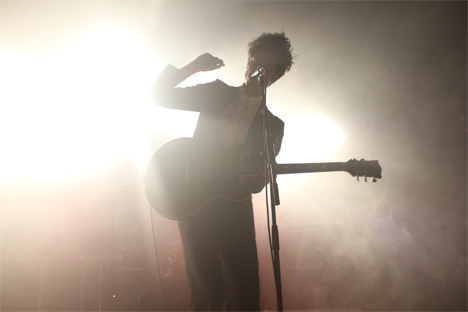 The incredible London based Uk band S.C.U.M presented their obscure noisy lo-fi post punk in a fantastic show. The band have the problem to be compared with bands that have similar image and sound like The Horrors or The XX, but this band seems much more fresh and their live show is more powerful. 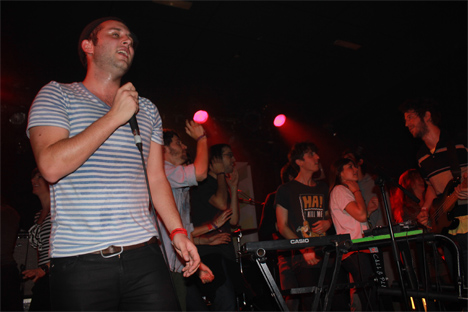 The guys from Brooklyn, Small Black, presented a joyful pop concert and the audience was happy to listen finally something to dance. Band and crowd had fun during this show and finally the band invited the people to join them on stage and to start the party. 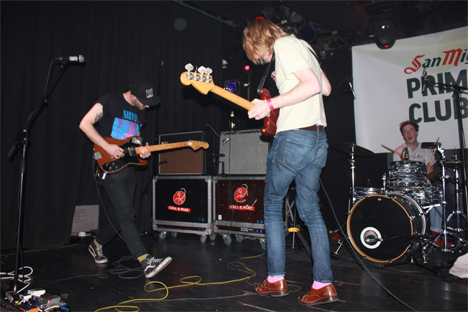 That concert was the starting point for the big party and craziness that followed the next presentation. What can we expect from a young UK grunge, garage band signed by Sub Pop? Male Bonding are electric, intense and fun, just what the people expected and just what the people needed and it was the best dish to following band.

Wavves… I really don’t know what to say about this show, the Californian band with Nathan Williams supported by the ex-Jay Reatard band members presented a show that since the first minute was followed by intense pogo, crowd surfing, people jumping from the stage… I was on the first line taking pictures as usual and I really had fun helping the people to climb up to the stage and to jump. More than that I can say that the band is not really something special, but the people who attended the show was fabulous. Friday was a great day with so many emotions, from big bands to young talents and from party on stage to crowd surfing. 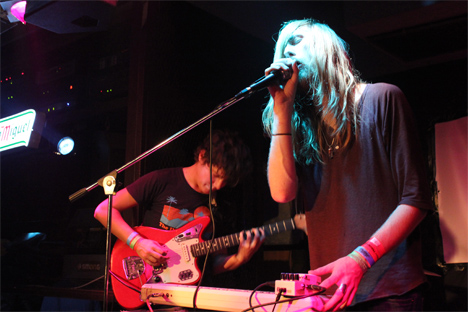 Saturday started early at the MOOG with the California rock surfer style from Ganglians. I really think this is a great band that have recorded with the label Woodsist who have a fantastic selection of bands. 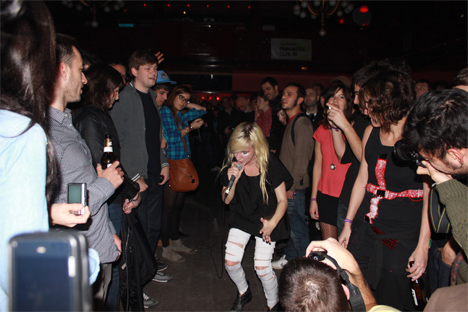 Later on at the Apolo it was a perfect moment to watch the hypnotic and powerful voice of Zola Jesus. The young Nika Danilova doesn’ t need too much to make it, an empty stage, not much light, joined by a man on keyboard, Zola is big on stage. The singer jumped out of the stage to sing and scream loud surrounded by the people. It was one of the best performances of the Festival. 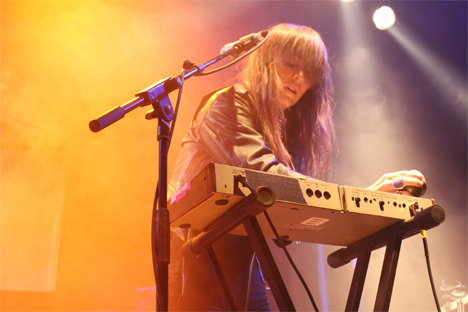 The Hundred in The Hands

So it was Saturday and a band like The Hundred in The Hands came to stage with super dance hits that were received by the people like water in the desert. 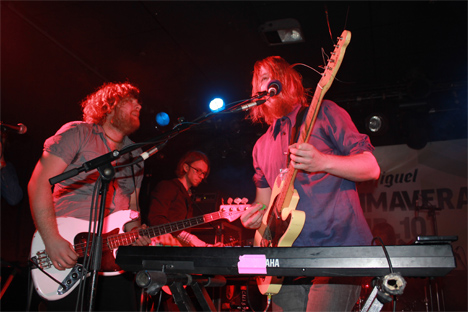 The real emotion of the night was to see a band exultant of joy and having so much fun on stage. The band Rubik from Helsinki (Finland), one of the coldest places on earth, seemed like a band from Latin America this night, the communion between the band and the audience was pure love, emotion and both were thankful. The band played as if it was their last show ever, sweating and giving everything they had. The audience appreciated it and felt love for this band.

This was another fantastic weekend with a mixture of sounds, performances, emotions and discoveries. This is what the Primavera Club is offering and I hope they continue during next years.
It’s time to relax and dream with the next Primavera Sound that right now have confirmed: Animal Collective, Ariel Pink’s Haunted Graffiti, Belle & Sebastian, Blank Dogs, Broadcast, Comet Gain, Dan Melchior und Das Menace, The Fiery Furnaces, The Flaming Lips, Fleet Foxes, Half Japanese, John Cale & Band + Orchestra perform PARIS 1919 live, Mercury Rev perform Deserter’s Songs, Mogwai, The National, Papas Fritas, Pulp, Sonny & The Sunsets, Suicide, Swans, Triángulo De Amor Bizarro.
Right now it is maybe the most incredible line-up of all times, and this is just the beginning.

See you next year at Primavera.