Way Out West is a three day festival in the middle of Göteborgs city park: Slottskogen, Sweden that attracts a mixed crowd and a variety of different artists. The festival takes place at the same time as a city-wide cultural fest which brings a lot of crowd and makes a shortage of everything. 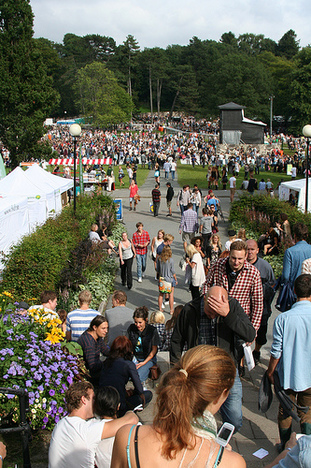 The play list on Way Out West is divided into two sections, the regular crowd gatherers in the Slottskogen and StayOutWest, a club version of the festival. 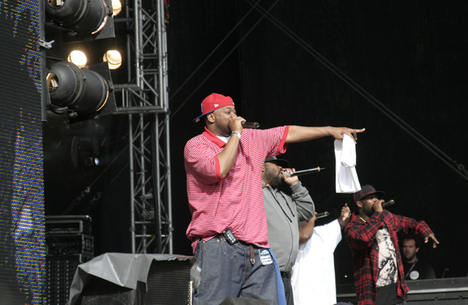 By the time I found a decent parking space close to the festival there was still time to spare until the first band I was excited to come and see; Wu-Tang Clan.

After a brief moment of getting familiar with the environment I placed my feet as usual on the quiet left flank by the stage. Now, the whole clan was not at the scene but the hits were flowing and so were some of the members solo songs. However, the show did not fill expectation I had, the clan was oblivious to which city they were in, Raekwon and Masta Killa interacted with the audience but the response was rather poor. However, it was very nice to see a relaxed and experimental performance on stage. 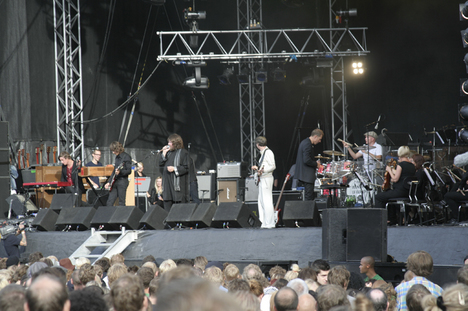 Soundtrack Of Our Lives were accompanied by Göteborgs Symfoniker which drew the majority of the crowd to the biggest stage at the festival, Flamingo. As the festival has a tight schedule and every band is on the clock then the shifting of bands needs to be clean cutting. I did not however feel the orchestra was used to its full capacity since most of the songs were very melodic. 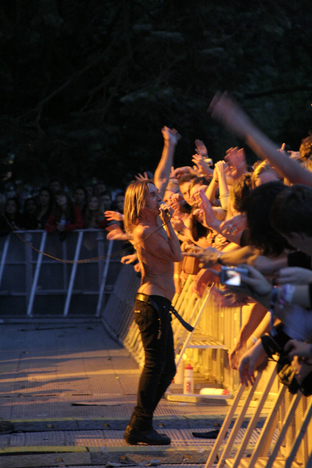 Beside highlighting Iggy’s psychedelic dance off with the audience and teasing them by being within arms reach there was balance with the performance and the music. I have not heard much of Iggy except what Maja plays for me and I can’t figure out whether or not I am used to his music now or I was just captivated by this leather skin beast. 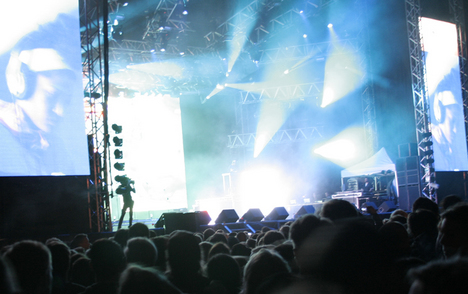 By the time M.I.A was to perform, the crowd was gathering, fast. All this pressure made its impact on the ground which by now had become more of a mud swamp than actual ground with decent footing. With mixed expectation of what M.I.A would bring along with all the criticism that came in her way in recent light, I was highly sceptical whether or not M.I.A would actually make any impact.

But this girl was hungry, unlike many of the shows of the festival M.I.A was more planned than the Joker, in other words, M.I.A, the dancers, basically the whole show was ready to invade a country. M.I.A started out by personally warming up the massive crowd that was building up by spinning the records and building the momentum. But she did deliver, a huge amount.

However, despite the light on M.I.A’s recent activities a majority of her music content has lost a very large portion of its significance. During the concert, M.I.A was more of a performer than an actually artist with creativity spurting out from everywhere. Unlike other artists M.I.A has the funds of employing creativity rather than doing it herself. 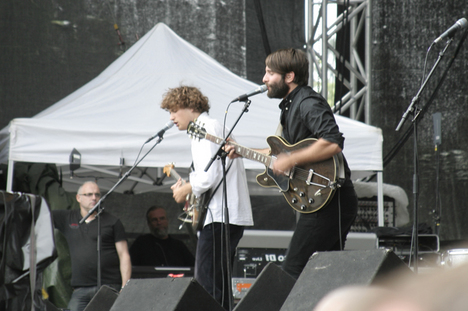 I decided to come earlier the next day to catch a glimpse of the Shout Out Louds, incredibly tired after having been on the move for several days nonstop it was very enjoyable to wake up to their soft sound and those honey-voices. 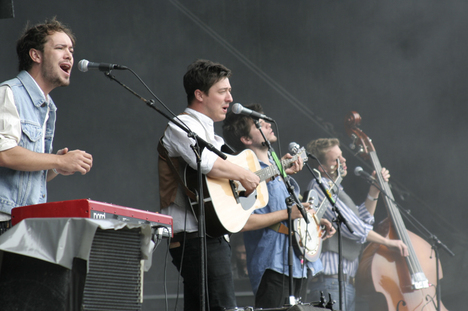 Over at the Azalea, Mumford & Sons was about to begin. Their humble opening performance was building up slowly with the soft songs in the beginning and exploding later on with on of their trade mark songs: The Cave. The song sounded incredibly much like their recorded counterpart which was a relief since most songs are downgraded when they are played at festivals. 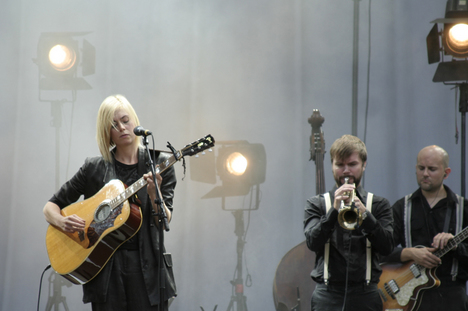 Rushed over to the Flamingo to see the highlight of the festival: Anna Ternheim. Now, I am no big crier and very rarely peak in using my emotions but while standing there, front row, in the middle, I started to shiver, got goose bumps and started to cry. Had to lift up my camera and cover up my eyes with the viewfinder.

Anna delivered her top items mixing the tempo between her softer songs like “Halfway To Fivepoints” to “What Have I Done”. Her voice which is usually controlled reaches a certain high note but during the show it exceeded and went on higher and higher. 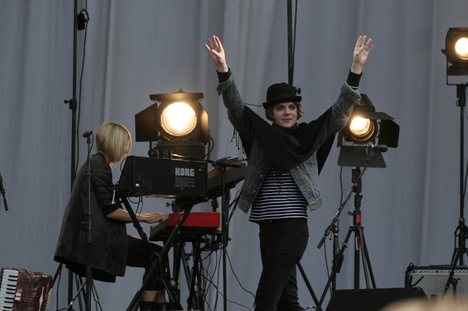 I was hoping for her “Make It On My Own” but the chances were slim, but the requests were many. The majority screaming request were high strung teenagers screaming for Anna’s famous cover of Broder Daniel’s song: “Shoreline”. Anna finished the show and left in the midst only to return to a chanting crowd and planted herself in front of a piano set, now out of the shadow enters this mythical creature that has not shown himself in a very long time even though we share the same town: Henrik Berggren from Broder Daniel.

Together they performed a duet of “Shoreline”, which Henrik gained high screams and tears from his fans in the crowd. You could tell he was rusty because he lost himself in the lyrics and messed up the pitch a couple of time, but all the feelings and emotions were there. This was though the highlight of the festival. 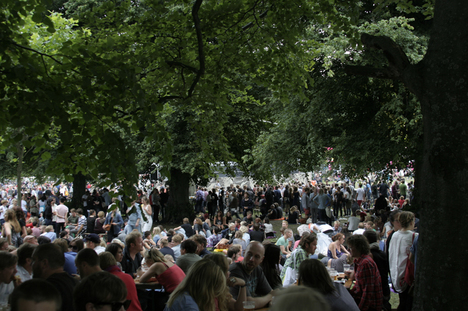 Being lucky enough to have the company of my friends we sat down together to eat up some overpriced fancy food, a 200 grams hamburger with whole wheat buns and red beats chips. Despite the food was slightly cold the tastes were much better than the regular food stands and so was the view. This particular beer area had a nice side view to the Flamingo stage.

While I had my beloved lunch and my company their cooling and refreshing beverages we watched the time count down to the days crowd gatherer: Håkan Hellström. I rushed over at the fence to get a picture before the show because soon half the city was going to come and watch this young fella, and on my way back to a more calmer spot people were rushed out because of fainting and half of their face covered in blood.

Håkan Hellströms performance was heartwarming and it was not just the intro video he had during the beginning of the show that made me feel very nostalgic about living in the same city but that he followed up by a song from his debut album “Känn Ingen Sorg För Mig Göteborg” was the peak of this performance. On my way out you still could see people rushing from the entrance to catch a final glimpse by this son of Göteborgs. 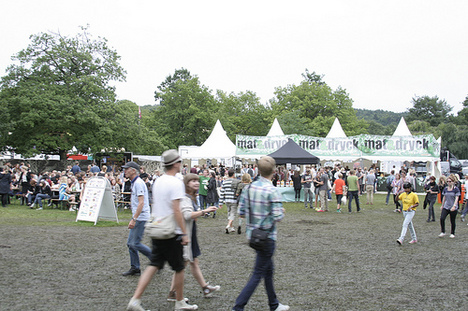 The many advantages of having a festival in the middle of the city are bringing new hope and light when festivals in the middle of nowhere are dying and going bankrupt right and left. Since most festivals are generally like the last front line of any war, its muddy, you don’t hear anything, there’s nothing even remotely close to a toilet. Then you can outsource in the city, it also makes for a quick getaway when the rain starts
falling. 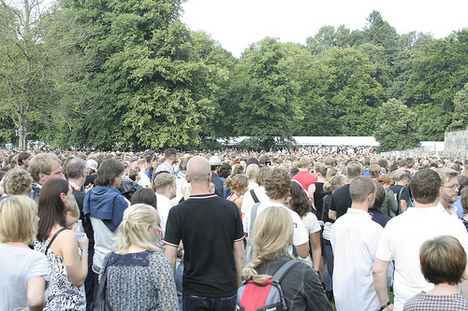 This sold out city festival had most “up’s” since it was booked with a huge variety of artists with different style and the crowd was full of people of different types. There has been a huge crisis in the festival business here in Sweden since the biggest of them all “Hultsfred” went bankrupt and a lot of other country-side festivals shut down.

Thank you for the music WayOutWest, but now I’m exhausted.