“FITC“, the latest design and technology conference mainly taken place in North America and Europe hailed from Toronto in Canada, hit Asia for the first time. It pulled off a great coup taking place at COEX in Seoul, having presentations by 7 outstanding creators, and all tickets were sold out bringing over 1250 entrees on October 14th, 2008. 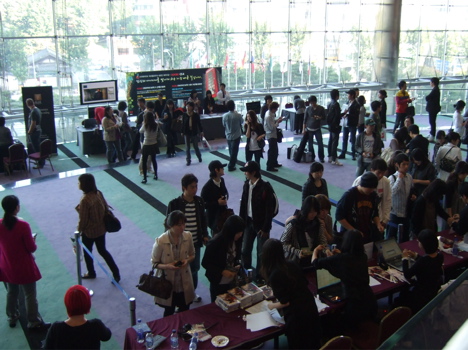 Every presentation was given at the same hall all day without failing to catch any on them. All the crowds including local young designers and developers spent a whole inspirational day taking note and listening to simultaneous interpretation in Korean. This was a very interesting event that you could learn not only the latest web technology information and works but also you could learn a lot about a presentation itself made by each distinct creator. Of course, everybody began with this word a bit awkwardly. Annyong Haseyo! 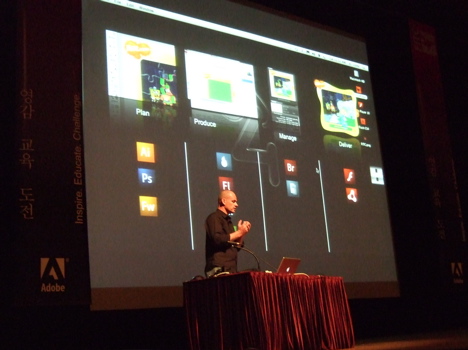 First creator was Paul Burnette from Creative Solution Business Unit at Adobe which has achieved extraordinary success in Flash and Web. The audience was riveted to him when he brought up the title from USB onto his prepared screen like magic using “Adobe AIR“. He said that 90% of the desktop on the web will be by Flash in next 10 months definitely, and demonstrated introducing mostly “Flash CS4” of “Creative Suite 4” which was not released yet at this point. One of the remarkable highlight was a new tool, Bone Tool, that enable to animate a human arm or a crane easily by setting up a bone. 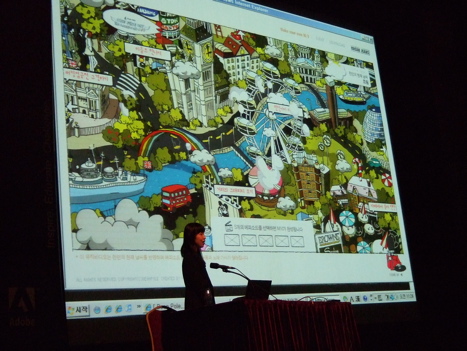 Only female speaker and only local creator from Seoul this time, Una Seole, is a creative director at Post Visual that sets out in digital marketing for major companies. She brought dramatic images of human evolution by depicting a back of human beings that started bending and went backward to primary figure by use of computer as a concept of “Storytelling has been the ideal way to convey a message since the beginning of human history”. A key will be interactivity as the digital environment was created and has been developed.

Along the theme “how to get involved in people” principally, she focused on ordinary situations, and showed many of her works that sent a message impressively. Among them, she introduced making processes of an interactive wall for Nike “AIR FORCE1” and the latest 3D animation “BE THE LEGEND“. Her presentation itself was a well-prepared storytelling unlike extemporizations. 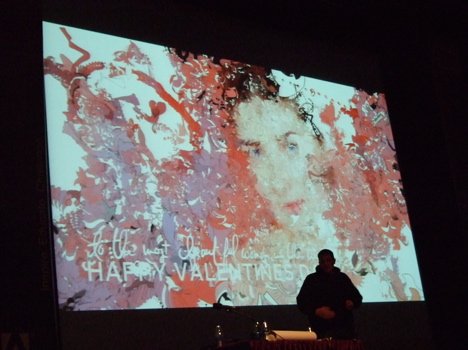 Erik Natzke, who is well-known for Shift being featured for both cover and interviewed the other day, was up next. His colorful and visionary experimental Cord Flash works were smartly screened with airy BGM. Trying to catch the audience’s attention throwing his postcard sometimes. His message “Inspiration is not what to see but how to see it” was delivered through his usual origin for inspiration such as beautiful colored photos and sketches that allowed us to associate with his works. It also included his ordinary mathematical thought. You must take a look at his interview again. His ribbonized code project that you can taste at Shift cover and his current work which consists of large scaled landscape prints are so anticipated. 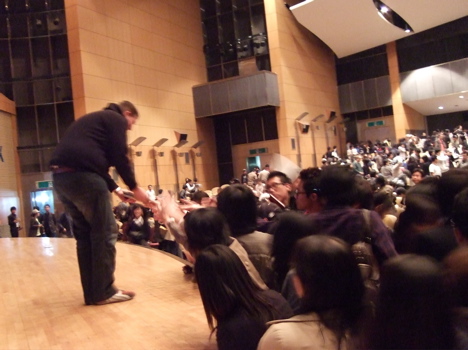 There was a crowd ponying up for his autograph after his presentation. It is just like Seoul. Popularities of Erik and Joshua Davis who was up later were very outstanding. You can tell from shouts with joy and flashlights during the session. And they convinced them with their brilliant presentations. 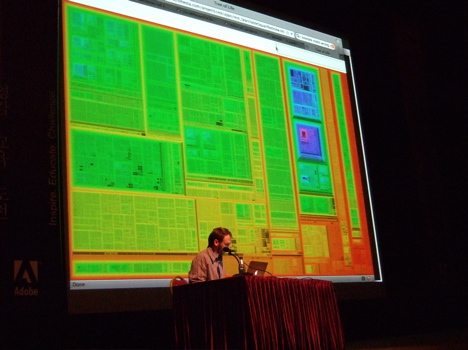 Even so, what gave the audience dazzles and sighs most was their enormous data works that they talked calmly and rather enthusiastic making processes that they displayed.

Also one of regular guests at SHIFT, Marcos Weskamp, gave a presentation along with activities of his current studio, Adobe team “INDEX” (Innovation Design Experience). As an user experience designer, he has been contributing for the future vision of the company since last year including “Information Visualization” which is one of his life work and the mobile media study. “Play a lot!”, he insisted his team vision. By urging to do so, you can reach “Discovery thorough playing” and “Build something quickly and repeat it without sticking with same idea”, he continued. The whole crowd burst into cheers as he introduced a technology of his current project that transfered the multi-touch function from iPhone to his laptop. You can leave your comment for Experience Design Team on the website “INSPIRE“.

Then he showed an image of “Encyclopedia of Life” which included whole creatures on the earth, that was one of his main research subjects “Information Visualization”. At first sight, they were just classified data images. But as it got in close-up, it also showed detailed scientific names and introduced “Human Being” as one of tiny point so that you can deeply realize a scalability of visualization. Later, he also brought some potential themes in connection with visualization such as “food chain”, “geographic routing protocol”, and “time”. 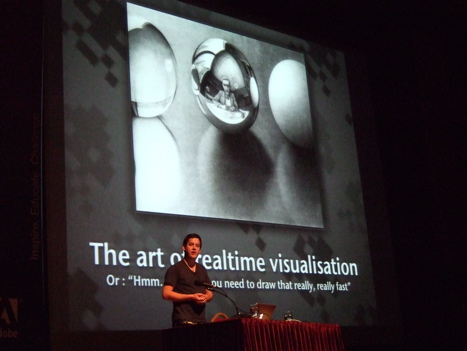 Ralph Hauwert, a Flash/Flex expert from Holland and one of the main member of “Papervision3D“, also introduced himself not as a designer but as a coder. He beat the Dutch by showing his amazing 3D work with realtime effect operated by Code Flash. That was a touchingly beautiful project with lighting filter effect that he experimented bringing it into focus again and again. 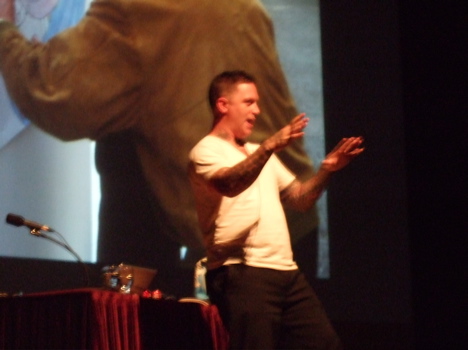 At dusk, it was the eleventh hour when people were about to be asleep after they spent rich and vibrant hours of intelligence, Joshua Davis came on the stage. Street arts, art works generated by Code Flash which was common to Erik Natzke, and product design using that technology, he introduced himself as a medium. The crowds were entertained by a variety of his communication tools. He also made much of the audience moving on the stage breathlessly, amused them telling a episode from his past workshop. He mentioned his first solo exhibit show at Maxalot Gallery in Amsterdam, and concluded with “Not making works for award nor evaluation but for love, listen to others, and work as much as possible.” 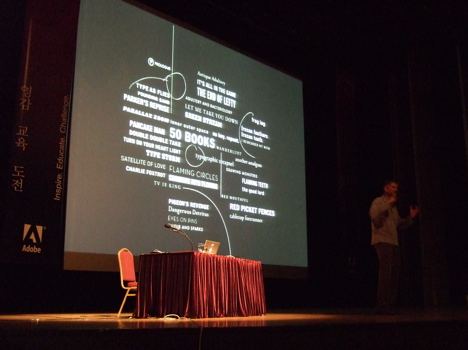 A final presentation was given by Kyle Cooper, who kicked it off with a Shakespeare’s quotation in the middle of the dark stage. He is a motion graphic designer, who has directed and produced more than 150 title sequences for film such as “Seven”, “Mission Impossible”, and “Spiderman” among them. A burst of applause went up in the hall when his magnificent works were screened one after another in the darkness. 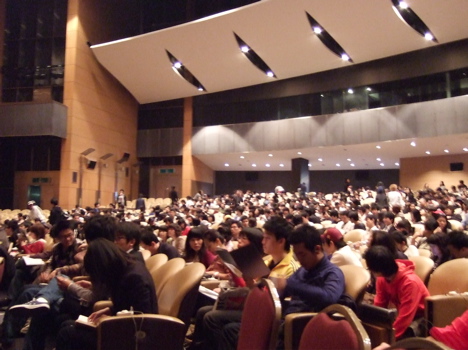 There was a common idea going back to the basics to all presentations given by creators no matter what the latest technologies they talked. And a diversity of their presentations were just amazing and perfectly fit each individual work. Later at afterparty, participants had a chance to talk to them directly through a interpreter at the lounge bar “Soulsome“.

Since 2002, traveling Hollywood and Amsterdam, an organizer of FITC told that a first step to have a successful event was to select a host city. How much you can feel a passion against interactive art in the city. It was not difficult to agree a reason why Seoul was chosen for the fist city in Asia after seeing the power at the venue through local volunteer staffs and the audience. Through this success, FITC Seoul is scheduled in 2009. Pretty much impatient with it and new designers and developers hailing from such a passionate event.