Perform in an opera. Be a part of a tv studio audience. Or be invited to film your favourite film star. It sounds like a virtual entertainment centre, but it’s actually a Festival of Participatory Art – ‘New Life Berlin’, curated by a collective of online artists at Wooloo.org.

Artistic curators Martin Rosengaard and Sixton Kai Nielsen chose thirty projects out of over 1,000 applications, to make up the festival program, using the Wooloo.org website as the key meeting point for applications, information, and dialogue. It’s their first festival, with another being planned for Denmark in 2009.

New Life Berlin’s open call, artist-run approach isn’t new, but its use of the Internet, to generate and document an entire festival, is. Much like Myspace or Facebook, on Wooloo.org artists can register and create profiles online, which are tailored to the presentation of artistic endeavours, and an open dialogue of critique through blogging, as seen through the collaboration with critical writers at ‘Open Dialogues’.

Martin Rosengaard, Festival Director, explained: “We’re trying to challenge the perceptions of a ‘model’ for art, to allow for experimentation with the whole structure of a festival, in a similar spirit to Fluxus, for example. It’s risky, but really interesting things come out of it. Through the direct participation of artists working together on collaborative projects, and by favouring those projects that directly involve the public as more than mere viewers, we hope to create new networks for communication and creative exchange”. 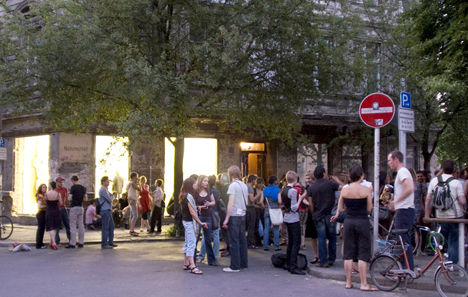 It’s a warm, sunny day, and I’m headed over to an address in Prenzlaur Berg in Berlin’s East, to check out ‘Fictive Days’, devised by Peruvian artist Sergio Zevallos, where eight artists have been living together for nearly two weeks, as fictitious characters from iconic films. They’re opening their doors for a public performance, and I’m already curious to see what the flat is like, and just how true to their characters the live-in artists actually are. It can’t be easy being Regan McNeil, the possessed young child from the film The Exorcist, on a daily basis for two weeks, especially if you’re sharing a room with Zorba from the film ‘Zorba The Greek’.