We, Birdo Flugas, took charge of planning and exhibited the animation “Asphalt watches”, which is based on the real experience of the nomadic temperament of Canadian artists Shayne Ehman and Seth Scriver, as well as the works created during their stay as Artists in Residence in Japan. And with Marc Bell, the collaboration room showing the intimacy of such art communities. 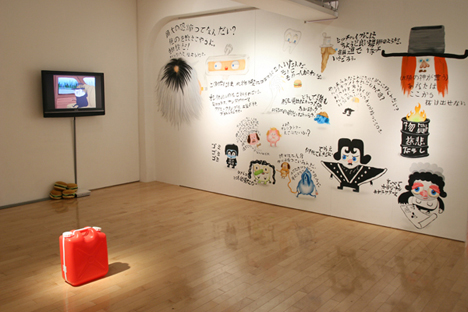 Shayne Ehman was born in Alberta, Canada and after he graduated from art universities in Canada and Holland, he studied mythology, folklore botany, environmental preservation as well as anthropology. Now he acts nomadically as an artist using various methods such as photography, illustration, animation in addition poetry while dealing with the occasional carpentry and stone craft work.

Ehman designs CDs as well as United bamboo T-shirts. In fact, Ehman is one of the youngest and most notable artists in the American street art scene−all his expressions create and draw viewers into a world of his own. For Ehma, “Nomadic” indeed represents himself or his style. 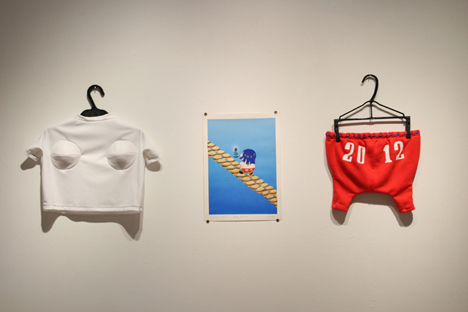 “Asphalt Watches” begins when a mustached Scriver in a black cloak and Ehman, who changes himself into a semitransparent ghost, jump into a freight train from West Vancouver headed towards East Toronto. They immediately notice the freight is out of service, and reluctantly resort to hitchhiking.

In this work, they use quotations from gags and traveling stories of representative characters from books on road movies and wanderings, such as Don Quixote and Sancho Panza, Huck Finn and Jim, Bob Hope and Bing Crosby, Jack Kerouac and Neal Cassady; all developing into a trip filled with such mentioned seminal characters and strange conditions.

A Middle-aged man who calls himself Santa Claus. A macho showing his tattoo off. A Michael Jackson-like jacket. Wendy’s hamburgers. All composed by Ehman, the soundtracks are burned into the front of our memory, while the characters written on the wall are all about dancing to the rhythm.

The memorable conversation and people are written on the wall which allows you to be able to vicariously experience their trip after watching the short but rhythmical animation. 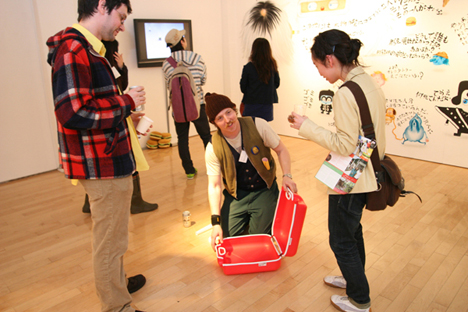 The Suitcase of Hitchhiker, Seth Scriver, 2008

In addition, Seth Scriver created the work, “Suitcase of Hitchhiker” by retouching a kerosene can. On every part of the site you can feel their attitude of showing humorous wisdom for all things living and in the name of creativity- its stimulating as one appreciates their flexibility. It is not a novelty in expression but rather a sense of spaciousness and flexibility that Scriver gives us. Scriver, tells visitors about practical use, then leads an ordinary gallery with the regulation, “DON’T TOUCH” into an open-minded space.