Targeting its completion in 2012, Saadiyat Island art complex project is already drawing world wide attention. Mubarak al-Muhairi, the director of the Abu Dhabi Tourism Authority (ADTA) which is managing the project says, “We’re bringing together the top architects of the past 100 years.” Each one of four major museums by itself has already great potential to bring visitors from all over the world.

Guggenheim Abu Dhabi by Frank O. Gehry stands out as one of the four. The Canadian born architect who is known for his distinctive design of Guggenheim Bilbao in Spain has now new challenge in the Middle East. This new Guggenheim is to be the world biggest Guggenheim, bigger than the Bilbao. 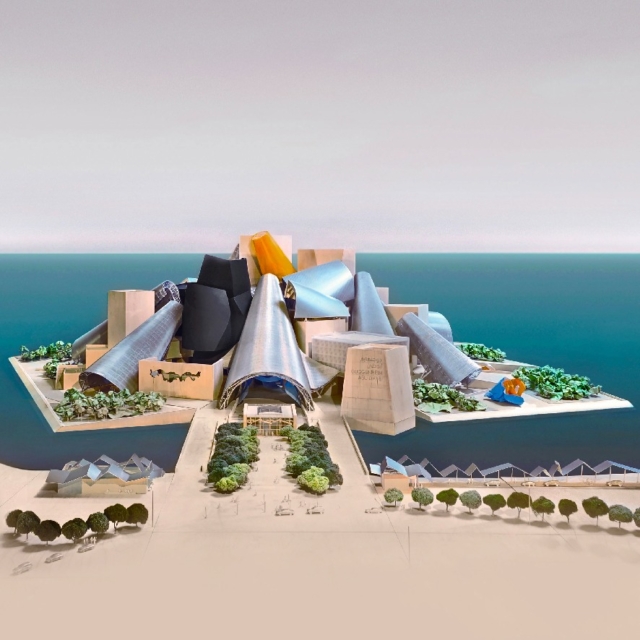 From the beginning of this project, Gehry had a clear idea that this had to be a new invention. The capital of the United Arab Emirates with its intention to become a world cultural hub has sent an invitation to Gehry to design Guggenheim as an icon of their massive art complex project in Saadiyat Island. The challenge for Gehry lies on Abu Dhabi’s environment which is completely different from the places he has conducted his previous projects. This uprising oil rich city has its foundation on Muslim culture, its temperature reaches up to 50 degrees in summer, surrounded by desert and Persian gulf. Gehry took all these elements into his discussions with Tom Krens, the director of the Guggenheim foundation to explore what their invention might be like. Their discussion then created the innovative design of Guggenheim Abu Dhabi.

Such a plan or idea to build a museum of contemporary art, in a place like Abu Dhabi has never been discussed before. “The landscape, the opportunity, the requirement, to build something that people all over the world would come to and the possible resource to accomplish it opened tracks that were not likely to be considered anywhere else,” says Gehry. “Approaching the design of the museum for Abu Dhabi made it possible to consider options for design of a building that would not be possible in the United States or in Europe,” he adds.

The idea for the basic concept of this design is based on the experience that Krens had when visiting artists’ studios within their large industrial spaces. “They have been able to create works that are way beyond the experience any of us have within the normal museum spaces. So in the end you create a cluster of galleries that allow for a tremendous amount of flexibility in organizing shows with a great deal of variety”, explains Gehry.

The Guggenheim Abu Dhabi’s collections and exhibitions will focus on modern and contemporary art from all over the world, not only from western cultures. “We don’t see financial investment as a major obstacle,” Sheikh Mohammed bin Zayed Al Nahyan, Crown Prince, is confident on their plan to collect arts worldwide for the museum by its opening in 2025.

The collection will focus on modern and contemporary art since the Second World War. This era is characterised by the transition from easel painting to the emergence of more ephemeral forms of performance, installation, video and earth art. The museum’s exhibition spaces and surroundings can embrace this wide range of arts. “Abandoning the notion of the museum as an insular and self-contained institution, this new model is engaged with and responsive to the vagaries of contemporary culture,” says Gehry.